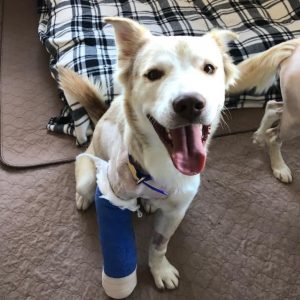 This male is one of two Husky mixes who were abandoned in their home after their owner passed away and they had no place to go. They are very sweet pups that we would guess are littermates. Both are happy, tail wagging pooches.

UPDATE 1/22/2021
Mary sending us an update on Peace and Union and their recovery from surgery.
Update on the Dingo Kids….
They have settled in and suddenly became the wild puppies that they are – Boisterous and active. Little slows them down.
Union learned he could climb out of the pen so I’ve have to move them to kennels to keep them restrained. They both have been vetted and Union’s cast changed (2 more weeks). Peace sees the physical therapist Monday for evaluation as she doesn’t try to use her back leg and the muscles have atrophied. She is very submissive to her brother and I have to separate them at meal times to be sure she gets her portion. She is more underweight than he is.
They are learning manners – Union has a bad habit of jumping on you which is annoying. But overall, they are loves and sweet babies.

Getting a closer look at these two siblings that we are calling the Dingo kids, the male who is Union appears to have his front leg broken, his sister Peace also seems to have a potential break in her back leg. Both of them have been sent to the ER where we can get an assessment from our surgeons right away.