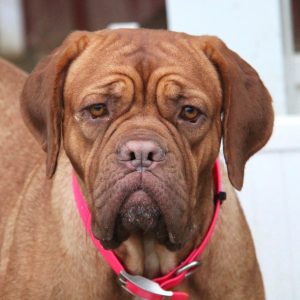 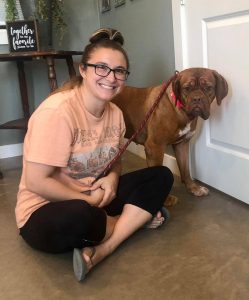 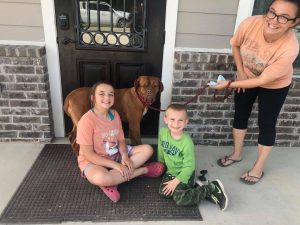 If I had a magic wand and could have chosen a family for Ursula this would be it. Maybe a magic wand was waved from the village i don’t know but when I posted the return of Ursula I got a message from Ashley Turchi saying this girl had captured her heart. The Turchi’s have adopted many times from Dog Ranch Rescue, starting with Marmalade who was a difficult placement for us, they then adopted Justice, and Boo Boo Bear who was a magnificent Bordeaux but was very old and hard to place. Marmalade, and Justice passed away a while back, Boo boo Bear just recently lost his life to his bad heart and that left the one and only Marley who they also adopted, but they were down to just one dog and Marley is such a good role model for any shy shut down dog.
Ashley was concerned about Ursula and what she might need with having a grade 5 heart issue but other than that her issues of being difficult to housebreak, and shut down and shy were non existent issues to the Turchi family. We told Ashley we would be happy to place Ursula with them and Dog Ranch Rescue will pick up the tab for any medical issues about her heart. It’s the least we can do and it will secure her in the most perfect home ever.
Ursula will have a family with 3 kids, live on a ranch with horses and Marley to show her the way. Ashley picked her up yesterday and on the way home they stopped for food and Ursula readily accepted a french fry from the kids. She went into the home with her tail tucked but she jumped up on Ashley’s bed and slept there all night with her. Marley goes and scratches at the door to potty and when she did Ursula was right there with her to go out and have her show her the way. She has come to the kids, they put their hand out and she walks up to them and allows them to pet her. Of course she is very afraid but this morning her tail wasn’t tucked anymore and I honestly think she is going to blossom here in this home.
The magic wand is in full force and Ashley will be sharing how she is doing on a regular basis. They will be calling her Sully and I can tell you that I am very happy about how this has turned out.
About Ursula:
7/17/2021
Ursula was born on 11/21/17. She was adopted on 10/26/19. Ursula came to us very afraid of humans, and really wanted little to do with them. Ursula has always enjoyed being and playing with other dogs, these pics are from when she stayed at the Ranch and you can see she enjoyed herself.
Ursula has been returned today, her family is upset, and we need to respect that. I’m not going into details about why she was returned but its through no fault of her own. Ursula is now 4 years old and its important to note that she came to us with a grade 5 heart murmur. Ursula isn’t on any meds for her heart, there is nothing to be done for it and as of now she has no symptoms from it.
She is very stressed after arriving at the sanctuary but we were pleased to hear that she did eat all of her meal and Christi said that she let her approach her, and love on her, she followed her on a leash to go out to the yard to potty and was very sweet event though she was terribly stressed. This is very difficult for a dog who is psychologically challenged after living in a mill to lose their home after 2 years.
Once again, keep it nice, and lets all just focus our energy on finding her a new home, this isn’t going to be easy unless we just get lucky and find that diamond home out there that reads about her and says I’ll put in an application now. I can only hope that’s the case..

I just love this big girl Ursula with her large meat waffle feet, her thick muscular thighs, and her blocky head. She is so damn cute, shy but she will do just fine in a home.

I have everything crossed hoping that she will be a good candidate for the balloon procedure at Texas A & M next month to fix the stenosis in her heart. She is only 2 years old and has her whole life ahead of her. Just another reminder that this girl was sold at a mill auction with the intent of selling her to another mill as a breeder dog.

Beautiful girl Ursula. She has made such great strides and now comes up to me and lets me pet her and she loves to wrestle and play with other dogs.

We received some pretty hopeful news about Ursula this morning. As you might remember she was diagnosed with sub aortic stenosis with an ultrasound. All of those results were sent to Dr. Rolfe and he feels that this sweet girl could probably have good results with the balloon procedure at Texas A & M to open this up and hopefully have a much better outlook on her life.

This beautiful girl is very, very shy but she is just beginning to creep up behind volunteers for perhaps a bit of affection. I was so happy to hear this news today. We will be sending her to stay with foster mom Mary who is close to A & M and can see her through this surgery and hopefully get her on a path of good health.

Let’s talk about Ursula and what we have discovered. She had an exam last week. She is only 2 years old, and yes of course she’s had puppies before, and she is potentially carrying puppies again right now.

Here’s the kicker though she has a bad heart at least a grade 4 to a grade 5 murmur. Dr. Pena examined her and said he could feel it through her chest without even listening with a stethoscope.

She is scheduled for two ultrasounds next week, one on her heart and one on her uterus. We are so hoping there are no Bordeaux babies in there but we will have to wait and see and make decisions from there.

Puppy mills suck and I would like to once again warn the public when you’re buying a purebred puppy you better know where that puppy came from because these people don’t give a damn what conditions their breeding stock have and they just breed them anyway.

After all the public cannot see if a dog has a heart problem that is congenital that she passes on to her pups.

All that matters is that it is a DDB pup and it is sold to the unsuspecting ignorant consumer who needs to know better, but continues to not do better, and buy puppies from places like pet stores and the internet that sells mill puppies. 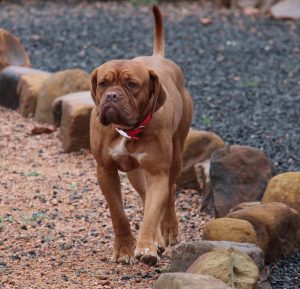 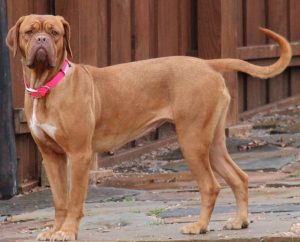 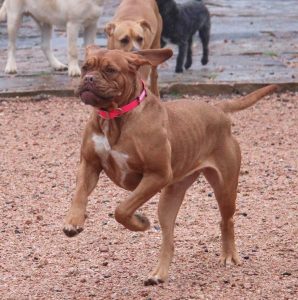 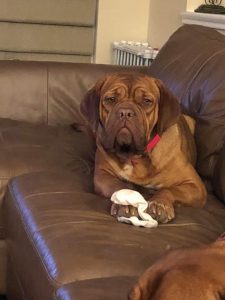 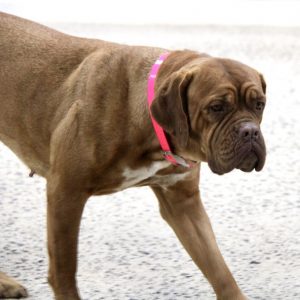 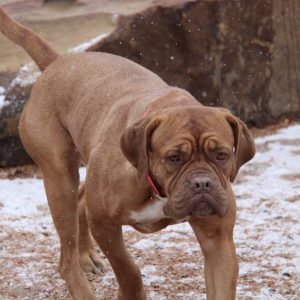