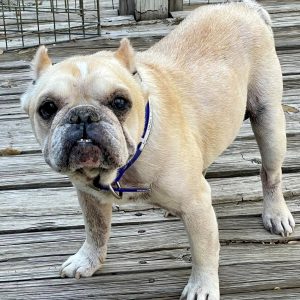 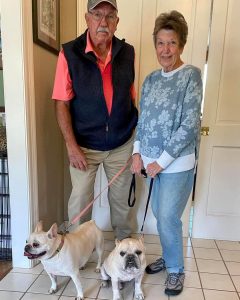 When Jan and Homer Rolston saw the first picture of Wallace they thought he might be the perfect fit for them. Jan is a retired nurse and, with that one look, he just spoke to her. They knew with his medical condition that it might take awhile before he was ready for adoption but they were willing to wait.
They currently have a small Frenchie named Rosie and had previously adopted Lily (aka DRR Shirley) who passed away in February. They felt Rosie needed a companion and they felt ready to adopt another. They drove in from Knox City this morning with Rosie to meet Wallace and take him home.
Wallace’s new name will be Mulligan. Homer, who loves to play golf, thought it would be the perfect name since it means second chance or “do over” in golf. Wallace (Mulligan) now has his second chance “do over” in life with a wonderful family and his past was in the rear view mirror as they drove off.
Have a great life,Mulligan! I’ll miss that little toofers face. I’ll be looking for you on the Happy Tails page.

About Wallace:
He was on our radar over the weekend but a stray hold was in place. The shelter contacted us this morning describing his condition and his need for help quickly. Mr. Ricky Barnes took off to drive and pick him up and we will get him to the help he needs.
Looks like someone has cropped his ears and he’s in pretty right shape. 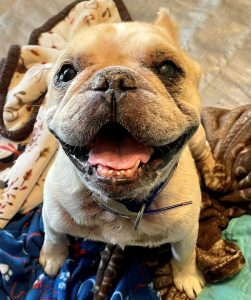 As soon as we rescued Wallace I knew he would end up with foster mom Millie. He is just the kind of dog she weaves her magic on and sure enough he was escorted over to stay with her and begin getting his health back.
“Mr Wallace is settling in. He’s been out to pee multiple times, ate dinner, had his eye drops and medicine and is now sleeping away. He sleeps in the crate for a little while then moves to the tarp area outside the crate and sleeps for a little more then will move again to the blankets…. Guess he’s checking everything out.
He thinks he might want to climb out of the pen but I told him “no” we don’t do that.

Poor guy is in such horrible shape and still so sweet makes my heart ache.”

This poor little man Wallace is so covered in infection from head to toe and itchy on every inch of his body. Off he went to see the doctor today to get him on the start to his new life.