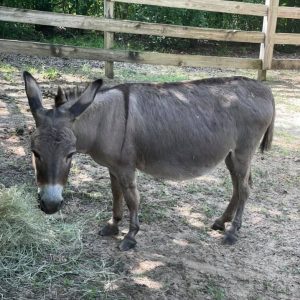 Adoption Pending
Age: Adult
Breed: Mixed Breed
Sex: Female
Weight: 210 pounds
Kids: Not Tested
Cats: Not Tested
Dogs: Not Tested
Fenced Yard:
Location: Anna, Texas
Special Needs:
About Wilma:
Whoops we did it again….
Millie is now fostering two more donkeys that are safe from being sent to Mexico for slaughter. These are two mini donkeys and are very small. Millie said they are in rough shape, its a boy and a girl and the girl appears to be pregnant. The female is the dark gray donkey and Millie said they re both very friendly and cute as can be.
The vetting for both of them will begin soon and when they are healthy they will both be up for adoption and will be found on our website.

We thought it might be fun to have the village come up with name suggestions for this pair. Give it a go and we will see if something sticks.

Millie wrote us a little update:

“Stacey stopped by the other day and met Wilma and Fred. Both are doing really well. They’ve had all their vaccinations along with a coggins on each of them and Fred was castrated so no more babies.. when Dr Spenser came out he sedated Wilma and got her hooves trimmed up and she’s walking a lot better. As soon as they start letting me lift up their hooves I’ll have a farrier out here to trim them some more. Fred does great in a halter and lead line. I’m still working with Wilma. She does let me tie a lead line around her neck and will walk out like that..the halter is next. Both let me brush them and love to take a cookie or piece of carrot or two or three! They have learned to come up to the front corral when I ring the bell to come in for dinner. Fred has finally lost all that winter coat and is such a handsome guy! Wilma gets sweeter by the day and is learning to trust me and that is just priceless.”

This update about the donkeys was written by Millie late yesterday afternoon, we were all so excited to learn that the mama donkey was pregnant with a mini baby donkey. Sadly before I could post this Millie found that she had given birth to a dead baby in the middle of the night last night. All of the excitement is gone and there will be no baby donkey, I will share her update regardless because it includes a lot of other details about both the male and the female that she has named Fred and Wilma.
Donkey update….
We had lots of great suggestions for names and have settled on Fred and Wilma. We have also found out that Wilma is pregnant .. we have a heartbeat, placenta and fluid in the uterus all of which was seen on a small hand held sonogram. So the baby will be either Pebbles or Bam Bam.
We have had the vet out twice. First to check for pneumonia which luckily they don’t have but were given antibiotics to be safe. They did the sonogram on Wilma which was very exciting. The second time was to check Wilma’s legs and hooves. Once I got them out in the corral and really watched her walk you could see she has problems. No only are her hooves in horrible condition from neglect but her back legs wobble and cross one another when she walks. The vet is running some test to rule out several things and we’re going to get the farrier out . She’ll have to be sedated to get her hooves done and while sedated they are going to get some radiographs to try and find out what the problem is. Could be as simple as stress and exhausted along with poor hoof care to possible laminitis.
Fred is about 175 lbs, 32 inches and approx. 4-5 years old. His weight is a little on the thin side but not bad. He also needs hoof care.
Wilma is about 210 lbs , 30 inches and approx 8-10 years old. She is very underweight to be at this stage of her pregnancy.
These two are super sweet. Both are letting me halter them. Fred walks extremely well on the lead line. Both love pets and of course Mrs Pastures cookies!