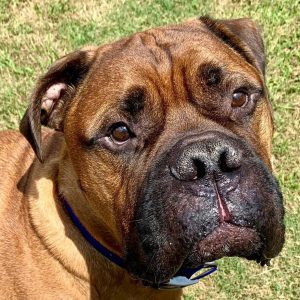 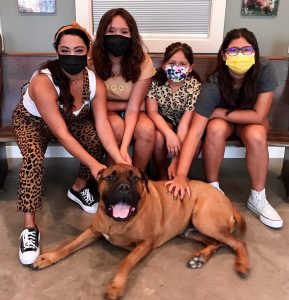 Today was the big day for The Zekester, Zekey Boy, Hubba Bubba known to all by Zeke! This is one of the sweetest and biggest boys we’ve had at the sanctuary. He’s a goofball and a love bug all in one. A gentle giant. The Woods family from Ft. Worth, Texas is the lucky family for this big, snuggle bug. He will live in a house full of ladies. This will utterly be heaven for this boy! He will have three human sisters to call his own. The girls were full of giggles meeting this adorable boy. They will keep the name Zeke. As soon as the leash was put on Zeke he went to the door to tell them hey let’s go home and off they went. Happy life! Zeke, all who you met you love you!
About Zeke:
We were contacted this morning by Debbie Nash from Bullmastiff rescue to see if we could help with this boy. He’s an owner surrender who is struggling to take care of him with Covid hurting his income. They think he has a blockage and he was in Houston but they had no ability to care for him anymore financially. All I know right now is he is supposed to be a good boy with other dogs and kids and hasn’t eaten in two weeks. They are suspecting perhaps a blockage or even a metabolic issue, but whatever is going on it needs to be addressed asap.
We reached out to Mary Jones and she hopped in her car and met the owner over at Blue Pearl down there to check him into the ER to start taking care of him. The owner has a good heart and loved his boy but knew that he could no longer care for him. We are happy to help and appreciate him reaching out for help.
Welcome to Dog Ranch Rescue Zeke, lets see what we can do…

He is incredibly handsome, he loves people, is a very friendly outgoing boy, loves all people and we worked at trying to see if he could live with other dogs because finding an only dog home is like trying to find a unicorn. Unfortunately Zeke is good with other dogs 90% of the time but 10% of the time he is not. He is far from dangerous but he has disliked dominant males, he has disliked a large submissive female, he has disliked a small dog as well. He doesn’t like excitement, he doesn’t like dogs that act wild and wiggle so as you can see finding a good fit for him is not going to happen with the exception of finding that unicorn, that only dog home. Zeke is isolated and will remain isolated until we find that unicorn, the other problem we have is we typically isolate a dog in the expansion at the ranch but the ceiling is being worked on in there so we have no place for him to go other than moving him to the sanctuary where nobody is. Wes lives next door and will visit him twice a day for breakfast and dinner and the rest of the time he will be flying solo over there waiting for that unicorn to appear. This dog has been through too much for one dog in one life. He lost his first home with a sock in his belly and starving to death with owners who couldn’t care fo him. He then lost his second home with owners who became ill and couldn’t care for him. All we can do is hope and pray that we can find a unicorn for this gorgeous sweet, funny lovely Bullmastiff and all we can do is to ask the village to share him for us.

Little by little we have been working with Zeke to come out of the lounge and see if he can co-exist with other dogs. I’ll let you take a look for yourself. A couple of things to point out when looking at behavior, notice that Zeke has no interest in other dogs, notice that he doesn’t bother to stop and smell them and initiate a relationship with them, notice that when he’s outside he marks his urine in multiple places. These are dominant traits, he isn’t interested in what other dogs think of him, he isn’t interested in wiggling and making friends with them. He is a dominant male but he is co-existing with other dogs as of today. He had a couple of exchanges with two male dogs that were inappropriate with him and they needed corrections but nothing worrisome coming from him. We will continue to work with him but right now we like what we see.

This will be a bit of a long story so grab a chair and let me explain it all. This first photo was when Zeke came to us last year in November. He belonged to some people who could not afford his care and said that he kept losing weight, they said he was good with other dogs and they needed to surrender him. Mary Jones took him in and he had an incident with one of her Bordeaux’s where he jumped her in the kitchen. Now we weren’t sure if he was actually dog aggressive or just food aggressive due to his condition. We separated him and went after his medical condition which turned out to be a sock in his digestive system that had clearly been there for a long time because he was emaciated. Thankfully the sock was able to be removed with endoscopy and he was on his way to good health.
He came to the Ranch and he was reactive with other dogs on introductions but quite honestly we didn’t have much time to spend with him, looking more closely at his relationship with other dogs and what he was capable of when an application came in looking for a Mastiff where he would be an only dog. The family had been looking for a dog just like him for months and months, It really was the perfect home for him and we said goodbye and sent him on his way.
All was well until the family became ill and could no longer care for him. So unfortunately Zeke has now lost his family twice, the first to the inability to financially care for him the second due to the family being well enough to care for him.
I hate stories like this, I hate for a dog to live a life of being uprooted through absolutely no fault of their own. I can’t even imagine this happening to one of my dogs, but here he is back at the ranch.
We are going to look very closely at Zeke and take our time to see if the incident at Mary’s house when he was starving and skin and bones was due to just that. A starving dog reacting to another dog in a kitchen where food is surely should not reflect upon who he is with other dogs.
Zeke is hanging out in the lounge for now and we are working with him little by little to assess his behavior. Travis took him out on Sunday to the main yard with all other dogs while Zeke was on a leash and he had absolutely no negative encounters with other dogs, wiggly puppies, goof balls and even dominant males were introduced without any incident. Zeke is a dominant dog, but so what lots of dogs are. As we have discussed many times in our podcasts what a dominant dog means. There is no negative connotation to a dog being dominant, it just is who they are.
We have slowed down at the ranch significantly, and can finally breathe again and take our time with Zeke letting him get to know us, letting him show us who he is and allowing us to find his third home, that most certainly needs to be his final home.
He is a big boy, solid body, beautiful dog and could actually lose a few pounds now. The emaciated skinny starving dog in the first photo is not what he looks like today. Zeke is a 4 year old Bullmastiff and I will keep you updated as we work with him and we can pinpoint what kind of home he needs. If it turns out to be an only dog home of course that is going to be quite a challenge as those homes are much much harder to find and we will need all the help we can get in finding that home.

In the meantime say hello to Zeke. 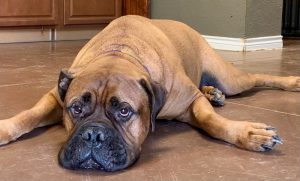 Zeke was examined by the ER team at Blue Pearl in Houston, lots of tests were run, some x-rays and ultrasounds and they felt pretty sure that Zeke had something fabric in his stomach. It hadn’t moved any further so they went after it with a scope instead of surgery and they did grab it and pulled it out. It was a very large sock.
He was picked up by foster mom Mary and we could then see just how thin this boy is, he appears to be in pretty bad shape and has been for quite a while, and he is a very hungry dog. Unfortunately he displayed some food aggression at Mary’s house with her Bordeaux in the kitchen and we are hoping it is food aggression due to his condition, and his state of mind about being starved. It’s not the least bit uncommon for dogs in this condition.
He has been transported to the Ranch and now has the lounge to himself to relax and decompress and have himself 4 meals a day where he can start to feel better about making sure that food will never be an issue again for him.
In a few days we will begin introducing him to other dogs and see who he is, we were told he was good with dogs and children but sadly we cannot rely on what people say and instead have to figure it out ourselves. He is a sweet boy with us and right now needs time to rest physically and mentally and that is what we will give him…