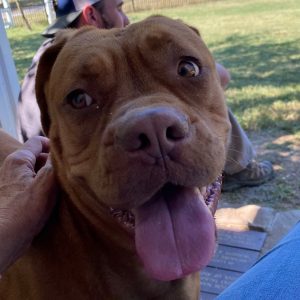 Available for Adoption Soon
Age: Adult
Breed: Dogue de Bordeaux
Sex: Female
Weight:
Kids: Not Tested
Cats: Not Tested
Dogs:
Fenced Yard:
Location: Anna, Texas
Special Needs:
About Zena:
Ricky is on the road again to rescue a Bordeaux. This girl is in a Louisiana shelter and has been for about a month. She was listed as needing slow introductions with other dogs and needed a rescue. A month in a shelter is not good medicine for a dogs mental health and decline is continuous.
We are booked at the ranch this weekend and have no space but we will figure out something to try and find a place for her to get her out of the shelter. Mr. Ricky Barnes called the shelter yesterday and they gave us some details on her history. They told us that there were 4 dogs in the house. 2 chihuahuas, a German Shepard, and her. They would get into fights, however the owner could not tell the shelter who was the aggressor. So somehow they determined that it must be the Bordeaux, and they gave her up to the shelter. While she’s been at the shelter, they have been monitoring her and have not witnessed any aggression to other dogs, other than the typical cage bantering. They said they would have euthanized her if they thought there was a problem.
As always peering in at situations don’t always give us the real truth, and dogs lose their lives because of it. We don’t know who she is of course, but we will do our best to understand, and like Duke, and Burt if they need to be an only dog we will try and find that too. Dogs with social issues with other dogs are hands down the most difficult to rescue, most rescues have a very hard time finding a foster that can isolate or that doesn’t have multiple dogs in the home already. It’s just as difficult for us and takes a great effort to keep them separated while we figure it out and at the same time work with them to understand who they are.
We are swamped, and now the rescue is inundated with taking in 39 dogs but we don’t care, I’m not going to let this girl languish anymore if we can help.
Ricky is on his way now to pick her up and bring her back to the Ranch.

We are swamped at the ranch but we will just have to make do. Ricky picked Zena up this morning and bailed her out of this very rural shelter in Louisiana where she has been for nearly a month. We are told she is spayed already, she was a little shy but she warmed up pretty quickly and came over for some love. This girl needs to have some peace and quiet and let her just relax. Ricky said she was so sound asleep in his truck he was afraid she had passed away. They just need some quiet and some time to rest. She does have bite wounds on all of her legs, front and back but with the story of her living with 3 other dogs and fighting happening when nobody was there we can’t know what they were fighting about and who was the instigator. Regardless she was blamed for it and she was left behind at the shelter. People need to know that dogs will fight for lots of different things left unattended in a home, the excitement of the mailman, or the gardener or the UPS driver, someone ringing the doorbell and the dogs get riled up and before you know it a fight ensues. Without anyone seeing it, the possibilities are endless and we will take the time to understand her. If she needs to be an only dog then that is what we will seek out. I can tell you right now that she is a little Bordeaux, she’s currently about 15 pounds overweight so she most likely was very overweight arriving at the shelter a month ago. In no time at all though she would readily and happily come running when we called her name and ask for a hug.
You are safe Zena and now the work begins for us to know you, vet you and find a home for you.