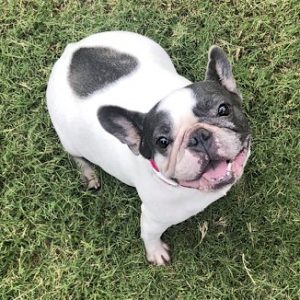 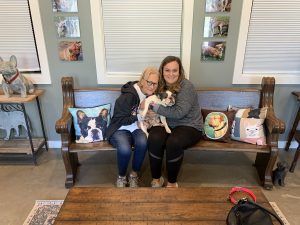 As you all know Bear lost all of her babies but today she gained herself her forever family with enver having babies again.

She has gone to live with Madeline Eubanks in Wichita Falls, TX. Madeline is a very experienced Frenchie owner having owned three throughout her life and she currently has a male Frenchie named Sherman who will be a companion for Bear. Madeline’s mom Stephanie lives with her and will be home with Bear and Sherman during the day and is excited for her to join their family.
Her name will be Bluebonnet because of her color, but they will call her Bonnie Blue.

Formerly known as # 239, she is a blue and white pied that has been bred and is due on 9/30/19 so she will be off to stay with Jenn very soon.
She is listed as having given birth to a litter of 9 puppies on 3/13/19, they wouldn’t haven been weaned until the beginning of May and then apparently she came into heat again as quickly as July and damn if they didn’t breed her again. Her poor little body never had a chance to recover but this will be her last and she will be spayed during her C-section.

She will be named after this gorgeous Golden Retriever shown getting hydrated while working hard.