Bluto was found for sale on Craigslist in Oklahoma by one of our fantastic volunteers. She jumped into action to get him before a mill owner could get their hands on him and there began his happily ever after. This once shy boy blossomed into a playful, affectionate pup while in the care of his foster mom.

When he was vetted and ready to be adopted, DRR found him the perfect family: Teresa Salyer traveled from Keller, Texas, to adopt Bluto who will have the company of two dogs to play with and Teresa’s grandchildren who visit frequently. We wish them a lifetime of happiness! 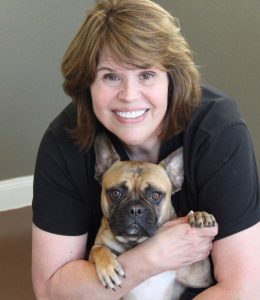 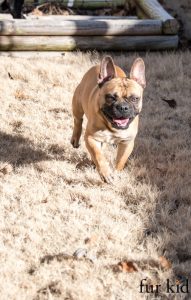 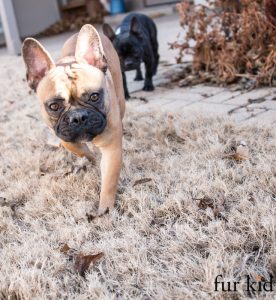 Bluto was living in an outside run in the cold winter of Oklahoma, he was sold as an 8 month old pup but he does appear to be an adult to us, we can’t know for sure. We do know that he is very scared and very timid but he loves to snuggle.

Update from his foster mom on who Bluto is:

Bluto has blossomed from a boy petrified by human touch to one that cannot get enough human attention. He was okay sleeping in bed with me because I was his level and he snuggled in my arm. He did have a few accidents on the bed until he learned to use the ramp to get down during the night and use pee pads. Now, he grabs shoes and anything else he sees around the house and gallops away with it. He also pulls at my clothing for attention and eagerly accepts my touch. He has a mind of his own, as most frenchies, but he is very puppy-like in his play. He does not have a mean bone in his body and is great with cats, dogs, people and (I suspect) children. Bluto will be an exceptional member of a family.