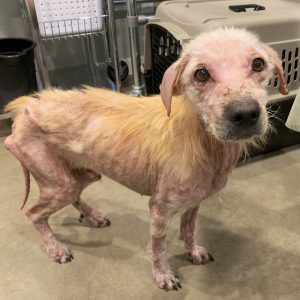 He never had a good life, he has always suffered. A stray in the valley, covered in scabies, infection and starving to death. He found himself walking the streets scrounging to live when he was picked up by animal control and placed in a shelter where we first laid our eyes on him.

We rushed him to the ER where for the first time he was taken care of by people who cared. He had so many scars that he suffered – including being shot with buckshot throughout his body. His teeth were rotten and the ER noted an abscess in his mouth. They also noted that his hip was very painful and the question was had he been hit by a car or was this something else. His lungs were problematic and we were trying to determine if he had a lung infection, did he have valley fever with a fungus, did he have an air pocket?

All of that was something we continued to work on and continued to try and diagnose. He ended back up in the ER a few days ago with lethargy, vomiting and shaking in pain. New x rays were taken and that’s when we were able to see that the problem in the lung had grown which led us to understand that he has cancer in his lung and it was then realized that the problem with his hip was cancer as well that had metastasized in his lung.

We knew then that we had to do the right thing for Casper and let him go, suffering is not something we tolerate not even for a minute. Our volunteers had spent so much time with him one on one in ISO that a group of them volunteered to take this sweet boy to Dr. Reno’s and help him cross the bridge. They brought him two cheeseburgers that he enjoyed and then he peacefully and quietly said goodbye to the suffering forever.

We are so very sad that he couldn’t be saved that he didn’t have a happily ever after but we have to take solace in what we did give him. A name, comfort, food, medicine and most importantly love.

He will finally have a home and a place where he belongs in our memorial garden and we hope his friendly ghost will always be with us.