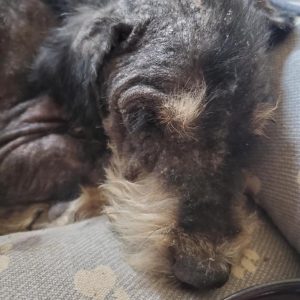 I’ve talked about Terry and Cal who run the rescue Paw-Posse down in the valley where literally hundreds of dogs are dumped all the time. We sponsor them with food drives to help feed all of those dogs on the street.

Cal had seen this dog a few days ago and we told him if he could catch him we would take him, it did indeed take him a few days but today he was caught. He is in terrible shape, and he is exhausted and dehydrated. Terry and Cal have him at home nursing him with rest and nutrition and Ricky will be leaving in a couple of days to bring him back to us. He looks like a big dog in these pictures but he is really a small little man at about 15 pounds. He does appear to be a scruffy of some kind and we are elated to be able to help save his life.

He will be named after husband and wife duo, he is a fireman and she is a policewoman their last name is Champion and I felt that was perfect for this little guy.

Little man Champion is pretty down and out, he doesn’t have much of an appetite in spite of being emaciated which isn’t uncommon. Ricky is on his way for him and we will be taking him directly to the ER when he arrives, he is going to need some fluids and a full workup checking for any potential blockages etc. From there he’ll go off to foster with Millie and Buzz over at “Recovery Ranch”. Life on the street is tough..we will get him the help he needs.