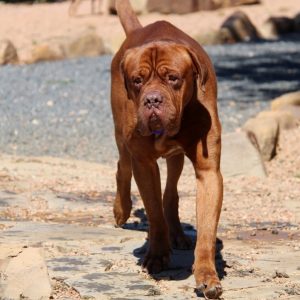 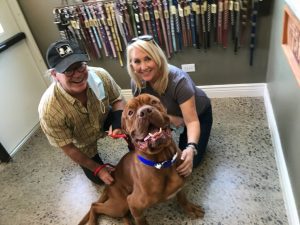 It took a while to find the right family for Chico but today he left with them. The Holmes family flew in from Birmingham, Alabama to drive this big boy home. They are experienced Bordeaux owners and lost their last one Tank who passed away from afib. They are huge lovers of the breed and were so very excited to call Chico theirs. They spoke some Spanish to him and we know that Chico likes that. I believe he will be keeping his name but I’m not positive about that. They texted Laura on the way home to tell her how much they love him already.

They’ve got a 9 hour car ride to get him home and we couldn’t be happier for all of them.

Once again an owner surrender in the shelter in Houston due to unable to care for him anymore. Mary Jones has picked him up for us, she said he is thin but still weighs 106 pounds so he’s a big boy. They told Mary he only speaks Spanish so we will have to do our best 😃

We are told he is 3 years old and naturally he is high heartworm positive..ugh…and that he is a nice boy.

Mary Jones is driving him halfway where she will meet one of our team captains Christi to bring him to the Ranch. We are not changing his name that he came with like a few other owner surrenders, so with that I would like to welcome to Dog Ranch Rescue Chico.

This is what we know so far he is very shy and seems like he doesn’t have a lot of people experience, he’s a little food motivated but not a lot, and he is slightly underweight. He has had an embedded collar at some point because he has the scar but it was caught early so it may scar and maybe not. He looks young probably 3 at the oldest. He was covered in flea poop but no fleas as the shelter gave him a Nexguard so the fleas had already died. He walks with hesitation in the rear end so he has a possible injury to the rear right leg or hip dysplasia. Travis has scrubbed him clean and put him to bed in the lounge for the night to settle in and feel safe and tomorrow we will do some introductions with other dogs.

Big Boy Chico has joined us all in the yard, here’s what we know so far. He’s pretty skinny and still weighs 106 pounds so he should be about a 125 pound bear when he fills out. His teeth are very shiny white so he’s a young dog. He loves affection and he needs a hug to get him to eat his food, Jessica sat with him this morning on her first day back to work after over 2 months of not being here. It will be short lived as we will both be back to baking cookies tomorrow.

Chico will steal your seat if you get up from it and he needs to be neutered like yesterday. He is very sexy out here and it causes issues with the other males so we have to keep a close eye out on who has the bigger peaches argument..typical boys…

Chico will see Dr. Reno on Monday but we already know that he is high heartworm positive and he has that challenge in front of him… 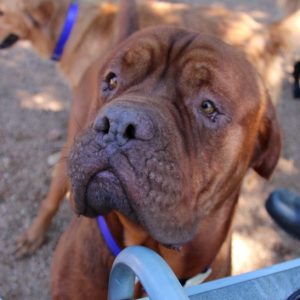