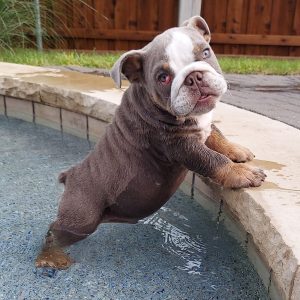 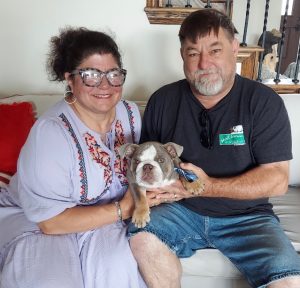 Remember me? Of course you do…I’m Chunk and just the cutest little thing ever! My mama and daddy, Katrina and Pat Grabowski drove in from Upland, California to pick me up today. Guess what? I’m getting an 11 month old sister too. She’s also a bulldog and her name is Delilah. My new mama said that Delilah needs a playmate, so that’s me! My mama and daddy have a beach getaway that they call the hut and my sister and I get to go there every weekend. Oh, I also will have three human brothers. One who will live at my house and two who will come to visit with their pups. I am going to have a dream life, soaking up the sun (but not too much) and wrestling with my new sis. I’ll see you soon on Happy Tails! Until then…Surf’s up!

About Chunk:
Late last night Dr. Murray at the ER texted Laura and said is there any way you can take this 8 week old baby boy English Bulldog puppy that is dying from pneumonia, we are told that he has to be in the oxygen cage or he turns blue. His owner brought him to the ER to euthanize him because he is a desperately ill little pup.
As we worry, and worry some more about the pups at maternity manor we knew that we could not say no to this baby. I do have to say the rescue very much needs donations, we have had some very expensive rescues in the last few weeks and this pup in oxygen around the clock will be no exception because its very costly. I don’t know if we can save him but we told Dr. Murray to get him into oxygen and try and save his little young life.
Ugh, I so dislike opening a Sunday morning with needing donations but unfortunately we just do. Wes has named this little boy pup for us, we hope he can be a little beacon of light and that he can be saved.
Welcome to Dog Ranch Rescue Chunk..

Our volunteer Liz Ross went and picked up Chunk from Dr. Murray and will foster him for a few days until he is adopted again. His new family has been selected and he will leave for that home in the blink of an eye.
In the meantime we will have the eye institute take a look at his cherry eye, I’m certain they will have him wait until he is older to repair it.
UPDATE 5/16/2021

Chunk is 13 weeks old now and weighs about 11 pounds, he is in good health and over his pneumonia. She said he does have a little cherry eye and that will need to be addressed but not until he is bigger.

We could all use a little good news…
Chunk has remained oxygen dependent but today I am told that he is improving and they’re hoping to begin to wean him off. He has a solid appetite, I’m told he eats like a maniac and has dreams of being a great big fat boy…Apparently his name was appropriate.

I just don’t think little Chunk could be any cuter. This little sassy man unfortunately is still oxygen dependent and has now transferred over to Animal Diagnostic Clinic and either Dr. Bronstadt or Dr. Rolfe will begin to tackle his case and try and help him fight off the pneumonia that is trying to kill him. We don’t know how long it will take, how long he will be oxygen dependent but with your help with donations he will stay in there for however long it takes. Just the oxygen alone will run the rescue close to 600.00 a day because it is very expensive to need the oxygen cage.
I am waiting to hear from the ADC team on wha the plan of action is and just how bad his lungs are looking. He is just a baby, an 8 week old baby and we are hoping that he has his whole life ahead of him still.

Chunk is feeling better in oxygen and the ER staff is so grateful that we accepted him and are trying to save his life. Pneumonia is very serious especially in a little pup, and we can only hope and pray that he gets better. If he does we of course knew that we would have to have a foster, typically a pup like this would go to Jenn but we are without that option right now as you all know. We are so grateful that our volunteer Liz Ross stepped up and said she will foster this little nugget and when he is well enough to come out of the hospital and out of oxygen. It takes a team to work together and we have a very exceptional team.