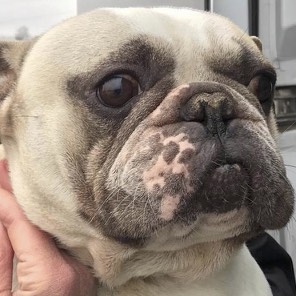 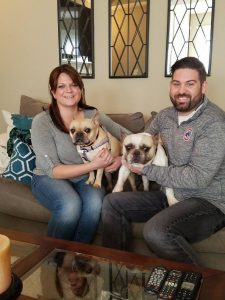 I’m so very happy we were able to secure this great big Chunky Monkey from the mill auction. What a special sweetheart he has turned out to be. I’m sure foster mom Nicole will miss this big sweet boy but we are grateful for her help with his transition to a new life.

Cate Bernardt has handled the adoption post and we all know that she’s got her own style of writing so I’ll hand the rest of the post over to her:

The Kaiser Family has waited over a year for the right Frenchie to add to their clan. DRR would like to thank them for their patience and opening their heart and home to Chunky Monkey.

Chunk will be a North Sider and has a gorgeous Frenchie sister. Sophie is chill enough to compliment this big boy’s personality but has ‘leadership qualities’ like most Frenchie females to help Chunk navigate his Happily Ever After. (As long as couches are involved, this won’t be a problem.)

It was pretty clear he won over his humans, Kara and Bryan, at the sidewalk meet-n-greet out front. He sealed the deal with his ‘boneless breast of chicken/flipping upside down’ routine to tell them he liked how they were scratching him and ‘more please’.

To the Kaisers: Cead Mile Failte to the Dog Ranch Rescue family.

We were met at the auction house by Cate Bernhardt and Kelly Stanbary to help us with picking up three of our Frenchies who will be driven back to Chicago and fostered there by Cate and Nicole Guvenoz in Chicago. These three dogs will become available to adopt once their vetting is complete. Applications will be handled the same way as all other rescues. Cate and Kelly also transported the 3 rescues secured for Rescue Warriors.

Up first is this very large male cream and white pied Frenchie. He was born in July in 2013. He was so shut down and afraid in there and I feared he would be the most sought after male in there because he is AKC and OFA certified. There were only two adult studs in this auction and as I said the hundreds of Amish in the auction house came with money in their pockets to buy and they were big losers on studs, because we got them both.