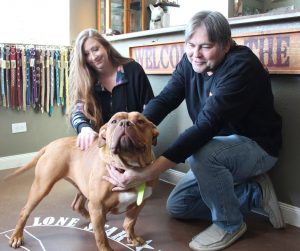 Shayne and Mark Vaught from Odessa, TX recently lost their Pit Bull and reached out to us about adopting Cindy, but of course were worried about having their hearts broken so soon if Cindy became ill with her kidneys.

We ran all the tests we could to get all of the answers available and Dr Rolfe called me to say it appears that Cindy was just born this way and because she has no symptoms of having kidney issues then we just keep on doing everything we’ve been doing. She’s on a kidney diet and is as strong as an ox, there’s no way to predict her future health and she may just have no issues but that’s not an answer we have right now, but then again none of us are guaranteed tomorrow.

We were so happy they were willing to move forward with taking Cindy home and giving her all the love she needs. Her name shall remain Cindy Lou Who and we hope she lives for a very, very long time to come.

About Cindy Lou Who: 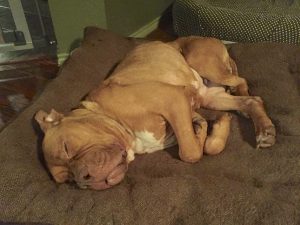 Cindy Lou Who is about 3 years old which is a guess. She’s part Dogue De Bordeaux and part something else, Bulldog, or Pittie or a little mix of both.
She came from a shelter in Missouri where she was a court case taken in a cruelty case which means she was in very rough shape. When we got her she was really just skin and bones with no muscle mass to her whatsoever and walked like a crab on her back end from too much small confinement for a very long time. She has gained so much muscle mass and weight that she looks like a think Mack truck now. She’s got elevation in her kidney values and has been placed on a prescription diet for that and will be retested soon to see if those have come down. There is the possibility that she may always need to be on a prescription diet but she will still have a great quality of life. She’s very active, very sweet and loves to eat.
Cindy Lou Who has spent a great deal of time at Trav’s house with his pack and Betty Lou Who and she does fine, she’s mischievous and will get into trouble in a home and requires a crate when left unattended.

She likes to play and she does well with other dogs with proper introduction. Cindy Lou gets excited to meet other dogs and behaves inappropriately with them. This is easily corrected and in a few minutes of working on that she gets along fine with them. She has too much interest in tiny small dogs that is a little harder to curtail but certainly is attainable and we have done that with her with every single small dog she has met.

Here is our problem with Cindy Lou, she is difficult for us to have at the Ranch because there are a constant flow of new dogs coming and going with all different levels of excitement and energy and we simply don’t have the time to iron out the introductions with Cindy Lou and each and every new dog that comes every single day so she spends the majority of time at Trav’s house.

We think it would be best if Cindy was adopted by a local family or a family who could bring the dogs they have and allow us to do the introductions and be confident that everyone is settled and calmed down. This is what we have been doing with her over and over again and once that’s done she’s fine.

We don’t think Cindy will do well in a home with cats or small critters.

She was in the office today being bossed around by Pinkie so I snapped a little pic of how healthy her body has become in our care.

We need to get the word out about Cindy, I’m sure her home is out there somewhere, you guys have never failed to help us find a home for any of our dogs so I’m certain Cindy Lou Who’s home is right around the corner too.