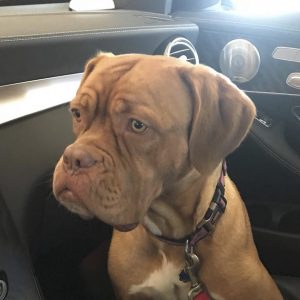 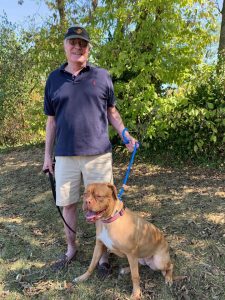 Dakota was also adopted today and this was a tough one for foster mom Nicole who loves this girl so very much.

Ohhhh this post is gonna be hard for me…Dakota was adopted today. This girl has been with our family for 5 months which is the longest foster I have ever had in my 4+ years of fostering. Dakota came to us with heartworm she was skinny and scared and humans had failed her beyond words. Dakota became my shadow…she looked to me for everything, for my approval of people and places and things. In all my years of dogs I have never seen a dog more enthusiastic about her human…how could someone have ever failed her? We have spent the last many months getting her healthy, letting her relax and showing her that no human would ever fail her again. We had some applications for her over time and none of them were right…she needed and deserved perfection. One day a message came to me asking me to speak to a potential family…they had adopted from The Ranch before…see if they are a good fit. I knew the minute I spoke to George and Anne they were the ones for this girl. George and Anne from Hollywood South Carolina have adopted three times from Dog Ranch Rescue already, they have Desi, Cha Cha, and Grumpy Bear.

They love the breed and they wanted a cuddle bug Bordeaux and Dakota spoke to them. Dakota and her adoption and her transport to her new home has been in the works for over a month…many people played a role and a great team made it all happen. Today I cried when she left, this afternoon I have tears writing this and tomorrow I will still have sadness over her leaving. Dakota is special and she is so worthy of the special home she has now…I hope one day to see her again and watch that shiny lip run to me smiling.

Happy life my sweet perfect girl we are so honored to have been a small part of your journey. 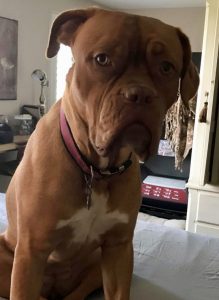 Dakota was rescued from a shelter in Aurora Illinois after being left there by her previous owner who was being evicted from their home. She came with Duke another Bordeaux. We are told she is about 1.5 to 2 years old and she is Heartworm positive so treatment is underway. She’s a sweet girl who loves belly rubs and is doing well with other dogs in her foster home. She will become available in Illinois very soon.