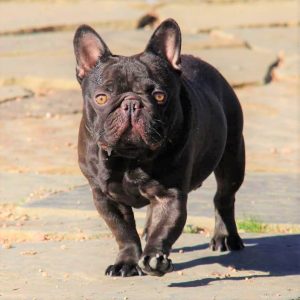 What a wonderful day for our little “breathing bone” boy, Dewey! Today his two dads drove up from Houston to whisk him off to their home with our former DRR rescue, Francis (now Gussie). Evan Choate and Steven Duble were so excited to meet him and are already in love. Evan said that it was Dewey’s eyes that first drew him in and then hearing about how he has learned to adapt to his breathing issues with his bone made them want to adopt him even more. Gussie takes daily walks, but is quite slow about it and doesn’t go very far, so Dewey will fit right in and be able to join them. Dewey will be keeping his name and will take Steven’s last name as well. So he will now be Dewey Duble. Isn’t that perfect?! Evan promised to keep us updated on his new adventures and we can’t wait to see him real soon!
We know you will be extremely loved and happy in your forever home. We love you Dewey (Doo Doo)!
About Dewey:
This little boy is the most worrisome for us and really struggles to breathe. He apparently has already had his palate trimmed and his nares opened up, but it doesn’t seem to have helped. The owner went deeply into debt trying to get him the help he needed and it was just out of her realm and the veterinarians around her. We will be getting him assessed as soon as possible and take care of this little toad.
His name is Dewey and he is 3 years old.
Welcome to Dog Ranch Rescue Dewey

I asked Karla to give me an update on how Dewey is breathing now that his upper respiratory infection is clearing and he has had surgery to remove the mass on his throat. The mass on his throat came back as benign so there is no conern about cancer there. Dr. Reno will look at him again in a week or so and we will see about getting him neutered. I am so discussing the possibility of if he might be a candidate for the LATE procedure which is a new cutting edge surgery that takes a laser and opens up their turbinates for dogs like Dewey who cannot breathe through his nose. Jennifer Busierre who is the adopter of one of our previous rescues Mr. Nibbs was the very first patient to have this done in illionois. I called her up and discussed this with her a couple of weeks ago. I shared it with Dr. Reno she had not heard of it, I will also discuss with Dr. wilkins to see what he knows about it and maybe Dewey might be a dog who could benefit from this. We shall see. 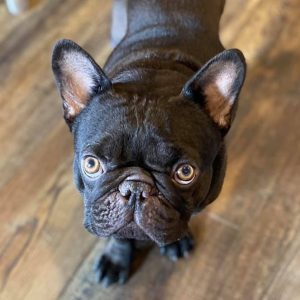 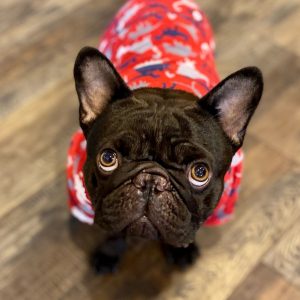 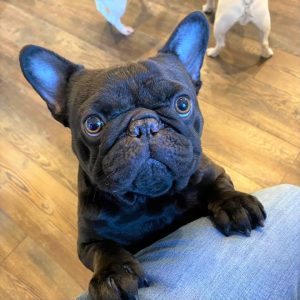 Dewey is finally settling in. He is sleeping so much better since getting his “breathing bone”. He is even starting to show interest in playing now that he’s more rested. He always knows when someone is in the kitchen and thinks he should get a piece of everything. This stout boy is a real love bug and just as sweet as they come. 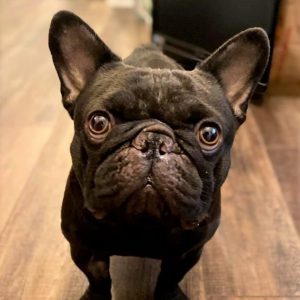 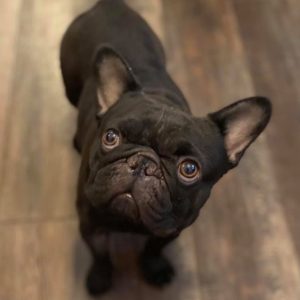 Dewey has been struggling to sleep as I told you yesterday. His previous owner reached out to us and reminded us of the bone that he was sent with and to give that to him and he will do this with it. We understood that he liked his bone, we didn’t understand that he needs his bone. She reached out to us last night and told us to please get him his bone. We scrambled and got it over to Karla’s house and he picked it up and climbed into his bed and fell asleep. Clearly this is a very sad story, and clearly this little man has physical challenges that are very difficult, but we are so glad she reached out to point us in this direction.
I must admit I’ve never known a dog to figure out how to solve his own issue, how to help himself breathe while he is trying to sleep. We will make absolutely sure that he has this available to him at all times. This isn’t just a toy or a treat for him, it is his breathing apparatus and we will always keep it available to him.
Bless this little man’s sweet heart..he is resting much better now. 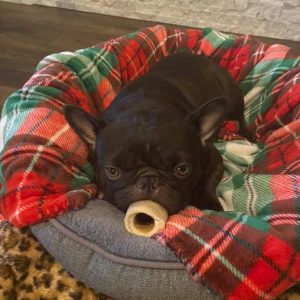 UPDATE 12/18/2020
I talked to Dr. Rolfe about what they saw with Dewey when they scoped him. He said he had a mass on his trachea he removed the whole thing and sent it in for biopsy. He thinks its most likely fibrous tissue but can’t be sure.
I asked him if it was big enough to be the cause of his difficulty with breathing and he said absolutely. Dr. Wilkins our surgeon also took a look at it too and said lets deal with the mass and go from there and see if anything else might be possible.
He does look like his trachea is trying to collapse and that is caused from the pressure it takes for him to suck air in and out. He said he would expect swelling with what they did because it is invasive, so he will be on steroids and medication for a bit, I told him he is a fragile dude and I want him to stay with them over night he agreed.
He called me the next morning to tell me that Dewey didn’t have any bleeding over night but he got himself worked up in his cage like he did with transport with Ricky, they put him in oxygen to see if that would help but it made it worse. He gave him a little Ace to calm him down, clearly cages are not his bag and he has lots of anxiety about it and his throat cannot deal with that struggle.

He has now been discharged and is staying at a foster home with Karla and Neal. This little man has a very hard time breathing and resting, Karla is now holding him in a propped position and he seems to have found a place where he can rest and sleep. Hopefully removing this mass and recovering from the surgery will make thing easier but right now he’s struggling.

Here is the plan for Dewey, I was literally on the phone most of the day yesterday talking to various specialists and vets on how to proceed with Dewey and his inability to get good airflow. We have decided that he will go on Wednesday to see Dr. Rolfe who is one of our internists and he will scope down his throat, while he is under our surgeon Dr. Wilkins will come over and take a look at what all is going on down his throat and see if we come up with a plan to hopefully correct it and make life easier and healthier for him.

Dewey has come to the Ranch as well, this little man has lots of trouble breathing and I wanted him here to keep an eye on him myself as to what he is doing. He has very severe features and reminds me of an owl. All of this leads to problems with his throat and his nose. We are told that he has had his palate and nares done but there seem to be other issues. He has an appt next Friday with our specialists to take a look at him and see what kind of options we have or what he might need that he hasn’t yet had. 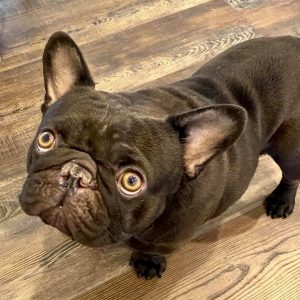 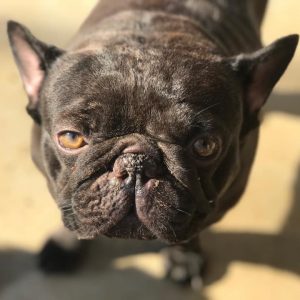