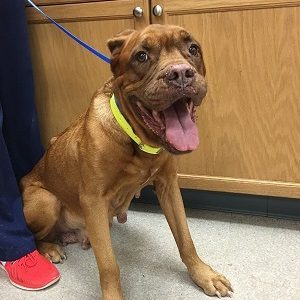 Poor Eloise began to fail with her health, she gave up eating and was just very weary. She was examined by the cardiologist and we discovered that her heart was failing in several ways, there was no surgery, or medication that would begin to solve the issues and we quietly decided to let her rest in peace.

This sweet, gentle, loving dog was found in southern Texas. She was a stray that showed up at someone’s barn trying to escape the heat, she was completely emaciated and dehydrated. The people contacted us hoping we could help, she was scanned for a chip and none was found. She was held for 3 days by the owner of the shelter to see if someone would come and claim her. No one did. 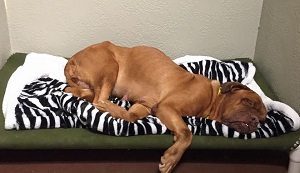 Eloise is an older girl, we’re not sure exactly sure how old because a life like hers can be very hard and we just can’t tell. She is starving and absolutely covered in fleas she has a big black mass on her back and masses in her mouth that will be removed once she is strong enough to have surgery. Same with her being spayed.