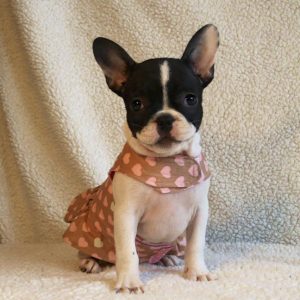 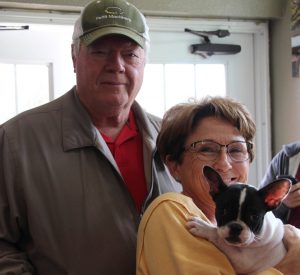 What a long road it has been for baby February. That day when all of the dogs pulled up in the bus from living out in the field, I could hardly believe my eyes when this tiny girl was one of them, she had to be no more than 3 or 4 weeks old and just a tiny little thing with a hydro head. We honestly didn’t know what her future would hold but she’s a tough little booger. She has flourished and her head has formed normally and her fontanel has closed.

Today was her big day to meet her family. She will be living here locally and will be going to live with Shedera and Clarence Farmer in Pottsboro, TX. The Farmers own their own business and Shedera will be home during the day with February. They have a Frenchie grand dog and are so excited to now have one of their own to love. February will have a Rodesian Ridgeback to grow up and play with and her new forever name is Jo Jo..

We are thrilled to see her move on and have a family of her very own!

When we rescued a group of dogs from a backyard breeder who was facing prosecution for animal neglect and cruelty in south Texas, this newborn and her mama were part of those we brought to the Rescue.

This little tiny baby that Dr. D says is 3 weeks old has hydrocephalus and all of the suture lines in her skull which is the spaces where her skull pieces should meet together have too much space in between them. Dr. D has consulted with neurology and they said let’s just let this tiny baby grow and see what her little skull is going to do. Some hydro babies do okay, and others begin to have seizures and neurological deficits that they can’t overcome.
No decision like that will obviously be made until we assess all aspects of this.

Right now she’s with her mama, she’s nursing well and she’s in good hands with Jenn at the helm of caring for both of them.

Welcome to the Rescue, February! 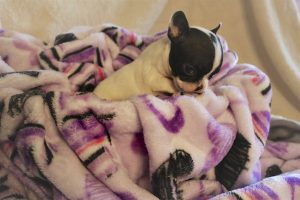