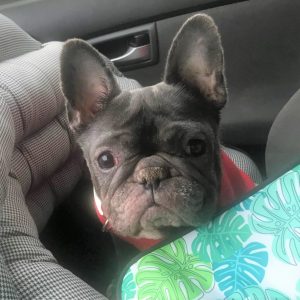 Age: Adult
Sex: Female
Breed: French Bulldog
About Gigi:
This girl is 5 years old and we are told is allergic to everything, not a good eater, has to be fed by hand and they said she just doesn’t seem to feel well. We will be looking at her frame and try to get to the bottom of all of her issues. We are also told she doesn’t particularly like other dogs so we will have to make some decisions on her behaviorally as well.
She loves people and will curl up in your lap all day long.
Welcome to Dog Ranch Rescue Gigi
UPDATE 1/21/2021
Gigi has been a very sick dog, we have run every kind of test and tried every kind of medication that would hopefully help. I got this update from her foster mom Annette last week and I think just sharing her words with you will give all of you an idea of the kind of care and love and effort she has given to Gigi:
Annette:
“Gigi is not progressing at all. She’s regurgitating in the middle of the night several times. If I go to the store or shower, her level of anxiety increases to the point where she vomits intensely. I have tried talking to through the camera I have to watch the dogs while I’m gone, but that only seemed to intensify it. The only thing that stopped it was when my daughter was here and she was not left alone while I showered and ran to the store. I can’t see how her gastritis is ever going to heal with this happening on a daily basis.
I also do not believe that the Megaesophagus is controlled at all by the sildenafil. I understand that regurgitation will always be an issue for Gigi, but I also understand that this drug doesn’t work for every dog . And I see no real improvement in the amount or frequency of that regurgitation since I have gotten Gigi from Cassandra. In fact, it seems to me, she’s deteriorated in that respect. In the last week, Gigi has regurgitated at least six times while being in the front pack carrier and I was walking to the trash to throw away the napkin used to wipe her face.
I’m also concerned about her quality of life. While I was excited that she’s gained a half pound and thought maybe it would be a turning point, she’s not gained any more weight. It fluctuates by a few ounces depending on the day. She does try to play with Pearl, but she doesn’t have enough strength or energy to do anything for more than a few seconds. She tried to chase after Pearl in the back yard, as much as she can sort of run, and fell over.
Right now I keep her upright for at least 45 minutes after each meal (an hour if it’s a really bad day) because less than that seems to increase the likelihood of regurgitation. I am feeding her 5 times a day and you can see the kind of time that requires in caring for her. If she’s going to have a chance at being adopted, even by a special adopter, the amount of time she needs upright has got to improve”
I shared all of this info with Dr. Rolfe and sadly he felt that there isn’t a good outlook for Gigi, he said the last ditch effort would be a feeding tube inserted but said she would still most likely vomit. The acid from her vomit has constantly and consistent burned her entire digestive track from top to bottom. She feels absolutely terrible and worst yet she is hungry and not gaining weight. He recommended that we let her go. Laura called her family that surrendered her to let them know ahead of time, lots of tears but she of course understood. Annette offered to be the one to stay with her, she said the vet couldn’t even get a vein with her condition and had to give her a little gas to sedate her first.
I want to thank both Cassandra and Annette who tackled the task of fostering her and trying to stabilize her problems but it just wasn’t meant to be.
Gigi crossed the bridge yesterday and will be laid to rest at the sanctuary.
UPDATE 1/12/2021
Update on Gigi who is with foster mom Annette.
Good days and bad days. A couple days she keeps almost all her food down with a little reflux. Bad days, it’s a vomit party. There’s been a change in diet to a higher calorie food, and a change in her steroid. The good news is that I weighed her this morning, and Gigi had gained a half pound! She wasn’t happy about a bath, but with the day she had yesterday, she needed it. Riley and Pearl told her it was spa day, but she’s not convinced.

This sweet little girl will always be a special needs dog and she will require a special needs home for sure. She’s not ready for adoption but I’m just putting that info out there for all the world to understand.

UPDATE 12/29/2020
Let me update you on Gigi, we did move her to a different foster home with Annette in Houston. Gigi requires a ton of care and needed someone who was able to do it and Annette recently retired and offered to help.
The results on the tests for Addisons, Myasthenia Gravis came back negative, what she does have in addition to megaesophagus and esophagitis is basically a dog version of Chron’s disease.
She is on lots of medications to help, Sucralfate to coat her esophagus and stomach before eating, Cerenia, Pepcid, Sildenafil, and Budesonide was added as a steroid to try and help. Basically this is an auto immune disorder but Dr. Rolfe feels pretty good that she will respond to steroids and said most of the time dogs like Gigi will be able to scale down to taking them once every 3 days or so.
She still has megaesophagus and always will so that will always require her to eat in an upright position and stay that way for 20 minutes or so after eating. Gigi right now needs to be fed 5 to 6 times a day so as you can see the time necessary to care for her properly really does add up.
We are continuing with this protocol and hope to see improvement on how she feels, she was underweight, she sleeps a lot and clearly hasn’t felt good for a long time.
I will update as we continue on the journey to hopefully wellness for her. 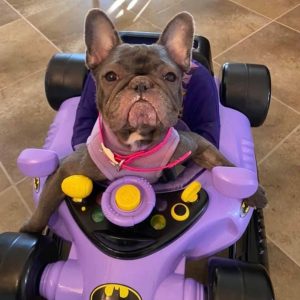 UPDATE 12/19/2020
Cassandra is working hard taking care of Gigi as we try and solve her issues with megaesophagus and esophigitis. We needed to get her a Bailey chair but that isn’t somehting that you can just buy off a shelf. It takes a few weeks to get one made for you, so a baby walker was suggested as a substitute until the Bailey chair gets here.

Cassandra is starting with small meatballs to feed her while she sits in an upright position, she also needs to drink her water this way, after eating she needs to sit upright for about 20 minutes to avoid anything coming back up which then would continue to flare up her esophagus. Some of the medications that she needs are specialty meds and they have been ordered and shipped but are not here yet, mainly the viagara and once that arrives we hope to help calm this girls digestive tract down and get her feeling better.

UPDATE 12/16/2020
Gigi has been examined and scoped yesterday by Dr. Rolfe. She does have megaesophagus, but he said it’s certainly not the worst he has seen. She has pretty bad esophagitis and right now everything is red and inflamed down there. He will be looking for a few causes of that, Hypothyroidism and Myosthenia Gravis testing for both of those are underway.

He will start her on several medications, Sucralfate to line her digestive tract, Pepcid, and the new drug to use on dogs like her is Viagra. They don’t know why it works, but they are having some amazing results with it. He will wait for the results of the two tests to come back and see if she needs any further medications. He will send instructions on how to feed her, but we’ve already discussed her sitting upright to eat. I asked what did he want her to eat and he said we have to try various things. Small meatballs, some do better with gruel, some do better with kibbles. We will be ordering a Bailey Chair for her to help her eat and drink while sitting up and hope these medications help. She is a pretty miserable little dog and doesn’t feel good at all. She needs a lot of help and we will do everything we can to make her feel much better than she does now.

Gigi is not in great shape, she has infected skin and eyes, her eyes are dry and she needs medication to try and correct the lack of tear production and she vomits a great deal. We had some x-rays taken and it appears that she has megaesophagus and perhaps an additional issue that we cannot be sure of by x-rays alone. She is also being treated for pneumonia because when a dog has this issue they tend to aspirate frequently and that adds to her issues.
She is going in to see Dr. Rolfe today for a scope to go take a look down there and see what we can determine, the worry is does she have a mass in addition to megaesophagus or does she maybe have a hiatal hernia? we won’t know until we get a good look down there, we might also have to take it another step further for a fluoroscopy procedure at animal imaging to see where things are going once she eats.
She is very much going to be a special needs dog, we are treating her now for skin and eyes and today we hope to have answers about what is happening internally.
Cassandra has taken her home to help her with feeding her in an upright position to try and help her digest her food properly and keep it down.
This will be a work in progress for sure. 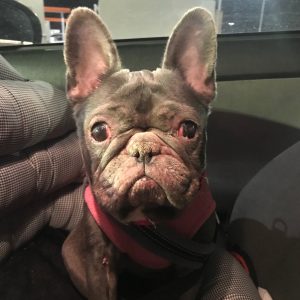 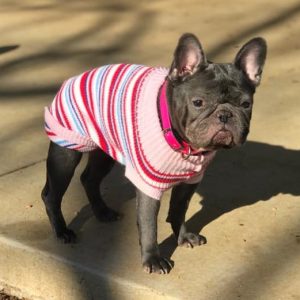