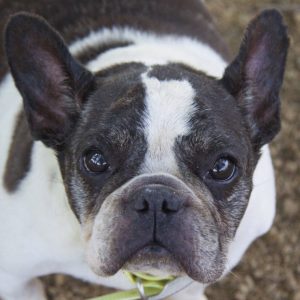 Last Sunday while working at the Ranch I got a phone call from a man with a New York accent, who said, “I want to adopt a French Bulldog, what do I have to do to get one?” I told him about our adoption process and he then told me how he lost his wife recently, and he had a little Frenchie that was his whole life since her passing. She just died three weeks ago and he can’t stop crying, he needs to try and heal his broken heart. He told me he doesn’t care what they look like, he doesn’t care what color they are, how old they are he just needs to heal his heart. I grilled him about his vet references and whether his vet would recommend him to adopt from us, and he whole heartedly said yes! Since he’s retired he said getting this new dog would not be a problem, flying to us and driving back was his plan.

Within an hour of getting off the phone with me he filled out all the paperwork and emailed it to Laura. She called his vet, called and spoke to him more about the adopting and the challenges adopting Glendola might face with house training. He passed all of our requirements with flying colors and then some. He also said he would do what was necessary to help Glendola and that he was willing to work with her. He said, “I want her and I will book a flight to Texas this weekend and rent a car and drive this girl all the way home.”

Her name will be Lucy because his wife loved Lucille Ball and he felt that was just meant to be for her. They will have a long road trip to get to know each other. He brought her a bed and squeaky toys that she of course loves so much. We walked out to the parking lot together and she stopped out in the grass to potty and he told her what a good girl she was. He said he will take her out to potty every hour of every day and he will love taking her for walks around the neighborhood to enjoy each others company.

He doesn’t do Facebook but his daughters do and they follow the page so he promised that they will help him get updates for us on the Happy Tails page.

When the stars line up, then the magic happens and this weekend was a very magical weekend indeed.

We wish Tim O’Brien from Rye Brook, New York and his new girl, Lucy, the happiest of happy lives. 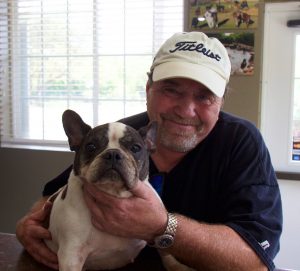 We were contacted about this four-year-old girl being sold on Craigslist advertising she’s had two litters and getting ready to come into heat again. Of course this girl in the wrong hands would lead to more of the same kind of life she’s already been stuck in. Volunteer Trish is in Oklahoma and jumped on the ad and picked her up this morning. She took her straight to the vet for exam. All I know right now is she’s HW negative and her bloodwork looks okay. We will know more in time about who she is and what she needs but for now she’s safe.

I went to my Mother’s Day names again and picked out one that I liked. I chose it because a dear friend to the Rescue, Glenda, lost her beloved JoJo who she adopted from DRR, and I wanted to honor her with this girl’s name.

Here’s what we have discovered about Glendola from foster mom Trish so far…
This plump darling is the sweetest girl!!! Unlike many puppy mill mamas, she loves to be held like a baby and cuddled. She does not like cats, and she is going to be a challenge to housebreak, she has no understanding of peeing outside and will require lots of work and patience. 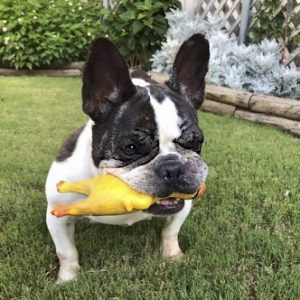