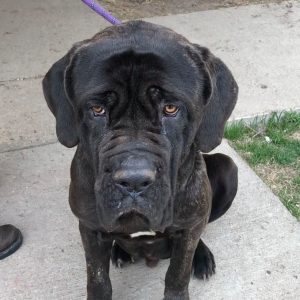 “Gotti is homeless… actually, it’s probably a blessing that he is…his “home” was a chain in a backyard with food thrown on the ground… this gentle 1-1/2 year old Neapolitan mastiff is wanted here and valued; we will see to it that he never knows that sort of life again… from this point forward, he will be cared for, medically treated, fed well, provided with clean, fresh water and shown the attention and love he deserves”

After the original post he was determined to be very sick and we were unsure if it was safe to transport him. He is very sick with heart worms and is in heart failure, his abdomen is full of fluid but they don’t believe he is in caval syndrome at this point. He is with a vet in Arkansas and have communicated with him trying to get him stable enough for transport. I have consulted Dr. Reno and the shelter manager, and the vet treating him and we feel the best thing possible for him is to be picked up in Arkansas and drive straight to Texas A & M where he will have the best chance possible. Not only do they have superior diagnostic capabilities but if they feel surgery to remove worms from his jugular is his only chance they are ready and capable to perform this surgery.

Info on Caval Syndrome can be found here:

We recognize that he is in very bad shape and we don’t know if he can be saved but we have a village behind us that can and will make it possible financially to give him the very best opportunity possible.

We will be putting Ricky on a plane this evening, renting a vehicle and driving him straight to Texas A & M which is a 9 hour drive and hope and pray that he survives the trip.

Just heartbreaking to look at but Gotti is in the best possible hands now. The ER team at Texas A & M have rushed him in after Ricky transported him from Arkansas this morning. Thye are stabilizing him now with fluids and bloodwork and then the diagnostic testing will come next. Laura called them and told them we will spare no amount to give him the best shot at life possible. We are realistic that this is a grave situation and we know that when we went through this with Marcus his chances of survival were about 10% and we pursued anyway, and we will do the same with Gotti as well.

I probably won’t know anything for a couple of hours but I will update you on what is happening first thing in the morning unless there is something that you need to know about tonight and in that case I have the option of re-opening the page with an update.

We only raised about 3,000 for him last night and that is not going to cover what we are most likely facing so I will ask again if you can spare a small donation we would very much appreciate it and see to it that it goes straight to Gotti.

Thank you Ricky!!! once again….You are a lifesaver and a hero.

Texas A & M quickly gathered the cardiology team to assess what was going on with Gotti. They called Laura yesterday evening and told her that Gotti has a weird case of caval syndrome. Normally the right side of heart normally affected with right sided heart failure due to hypertension. Gotti is a little different his worms are packed out into the branch of his right artery and filled with worms and blood clots.

They said surgery on him will present a huge challenge to do this through the right side of his heart because they are unsure if they could even reach the worms to pull them out through his jugular vein which is the procedure necessary and what was done with Marcus. They said even if he survived this surgery he would be looking at long standing chronic heart disease with severe pulmonary hypertension, and would need chronic meds for at least a year or life. They started Gotti on IVs last night with steroids and medication to help his heart pump better trying to stabilize him so he would hopefully do better in anesthesia.

Dr. Janacek who is a 2nd year cardiology resident was included in the team and she was present at the time that Marcus came in for surgery for caval syndrome.

The plan was to take Gotti to surgery this morning, we knew the odds were stacked against him but we knew that they were for Marcus as well. Laura told Dr. Janacek that money was not an object and even if Gotti didn’t survive this surgery he at least would provide the opportunity for these specialists to learn and try to save a dog in his condition and his life would have meant something.

We were devastated to get the call at 3:00 am that Gotti went into full cardiac arrest and in spite of pulling out all the stops with CPR he passed away. Texas A & M will keep him with them for the next couple of weeks and a necropsy will be done so the students can learn as much as possible about caval syndrome. He will then be cremated and will come to the sanctuary where he will be laid to rest in the memorial garden.

It is just horrible and we hoped and prayed for a better result but Gotti had been forced to suffer for far too long. We cannot thank you all enough for donating to try and do all that was possible for him and for sending all of your thoughts and prayers. We cannot thank Ricky enough for his heroic effort to bring Gotti to a place of good health and to feel some love that he obviously never ever got to have in his short life but he just couldn’t hang on. We are grateful that he died knowing he had a village surrounding him and a team of specialists working on him and he didn’t have to die in the mud on a chain. 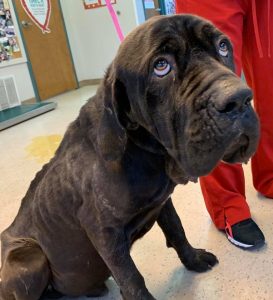 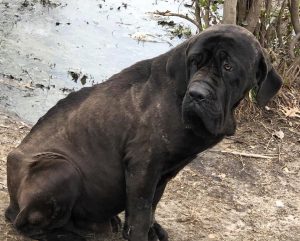 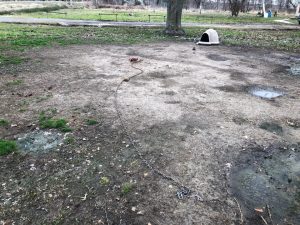