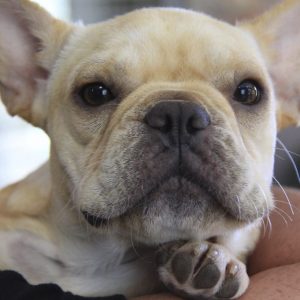 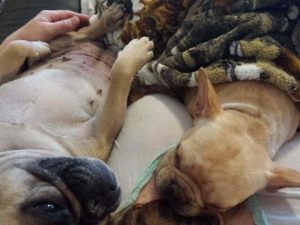 We unfortunately heard the news that the adopter of Harper said she was unable to keep her and that her needs were more than she had anticipated. As I’ve stated Harper has been a challenge for us from the get go.

With this information D.S. Told us that she would prefer if she adopted Harper herself and that she went nowhere else again.
She has been caring for this baby from day one since she was only 8 months old and now she is an adult. D. S. knows her like the back of her hand and she’s Leona’s cuddle buddy so we think if she wants to adopt her then that will be the best thing for everyone.

It’s time we have a little talk about Harper. We have many people inquire about adopting her so I think it’s time I try and spell out very loud and clear just exactly who this dog is.
She’s just a baby, we’ve had her since September and we have been through so much with her. Originally it was believed she had a liver shunt and that is what was causing her fly biting. Many tests later it was determined that was not the case. Her liver is fine but we were dealing with strange issues like her flipping upside down on her back and burying her head. She did this a couple of times and she vomited and aspirated and came down with pneumonia.
She has been hospitalized multiple times, she has had a CT scan, she has had an MRI, she has had 2 brain scans, and she has had every workup on her that we could do.
What we did discover through all of this is that she does in fact have a seizure disorder which is why she fly bites. We also discovered with the MRI that she had an inner ear infection in front of the ear drum that was severe. A small hole was made in both drums in order to drain out the pus and flush them clean. She was placed on antibiotics for both her ears and her pneumonia and it took many weeks to finally clear them both up. This issue is why she was flipping upside down in order to relive the pain and pressure.
She is happy and playful now where she never was before. The doctors at the University of Missouri recommend that she eats 3 meals a day for the rest of her life and she does best with it being a wet liquid like food.
She still continues to fly bite and she is on anti seizure medication, both Keppra and Phenobarbital. We continue to recheck her blood in order to make adjustments on it to try and get her to what they call the therapeutic range. There are many things that are interesting about her fly biting “seizures” first of all when she does it she is very aware of it, second if you call her she generally will stop doing it. Sometimes they get more severe but if you pick her up and hold her she automatically stops. It’s puzzling to me and it’s also puzzling to the doctors. I really don’t know if they fly biting will stop even when we get her to a therapeutic level and it seems like this is just something she’s going to do regardless.
She is with D.S. in Missouri and has been the entire time but she has come to the Ranch on several occasions where I have been able to spend time with her and observe her behavior. She is adorable and tiny and loves to be held. Our goal is to find a home for her where someone goes into this knowing exactly who she is, and exactly what the expectations of her and her problems will most likely always be.
We think she needs a home where she could go to work with someone, live with someone that works from home or just has someone at home.
Harper is just a year old now, she is full of life and plays like a happy little girl, she gets along with all dogs and cats but she will have to have a home where someone is going into taking care of her with their eyes wide open.

If you think that might be you please fill out an application online at dogranchrescue.com and we will be happy to have a conversation about her.

Baby girl Harper has been in our care for a few months now. She was a breeder surrender with issues that have had her fly biting which we knew were more than likely seizures. She also was very dull and had no signs of being a puppy, she was very thin and had a strange behavior of flipping over on her back and burrowing her head down in an upside down fashion. Two times while doing this she vomited and aspirated which resulted in pneumonia. We admitted her into the University of Missouri for a multitude of tests, CT scan and that led us to an MRI. It was discovered on her MRI that she had a very bad infection in her ears very deep in her ear canals on the opposite side of her ear drums. They put a tiny hole in her eardrums to drain out all of the infection and clean them out. She was placed on antibiotics for this. During the process of her MRI we performed an EEG on her brain and it was obvious that she was indeed having seizures.

With that information in hand it seemed that the ears were the problem for the flipping upside down and the dull personality, she has since that time begun to play and frolic like a puppy her age should. She has been placed on Keppra and Phenobarbital and we are currently trying to adjust her medication to a therapeutic level with her fly biting episodes.

Harper is special needs, there is no question about that and anyone adopting her needs to be prepared to handle her needs for the rest of her life. Harper will have her very first birthday on 12/31/15 and we hope she has a very long happy life ahead of her.

If you think that you might be a good fit for caring for this baby girl just let us know.