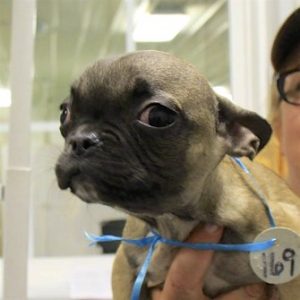 In Nov. 2105, the Rescue attended a puppy mill auction and was able to secure six puppies, freeing them from a hellish life. Once at the Ranch, two of the puppies, Hickory and Onion, stood out as possibly having severe neurological deficits that were not going to get any better, already showing serious signs of problems that were going to get much, much worse.

After examination by our vet, Dr D, it was clear that Hickory and Onion were very sick. They were both suffering and never stood a chance in this world, born into a filthy, deplorable puppy mill, inbred so badly they had no chance at a normal life, so incredibly sick with the environment into which they were born. The difficult decision to humanely end their suffering was made.

Little Onion and Hickory are now resting at the Ranch under Big Larry’s tree, who as we all know is the keeper of lost pups, a job he would do so very well.