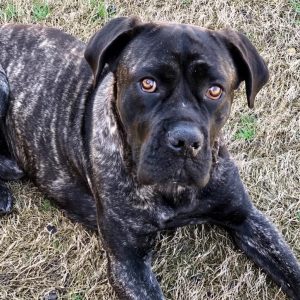 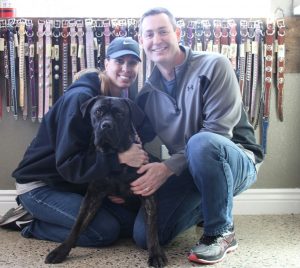 This is a very special adoption for us so I’m going to close the night with his story. Hubert was rescued from the shelter with a few hours before being euthanized due to his behavior. He was terrified and knew nothing but to panic and alligator roll at the end of a catch pole. He would growl and retreat and he needed to be rescued. Travis drove to the shelter first thing the next morning and spent a little time with him and had him walking nicely on a leash in a few minutes. He texted us and said “I’m taking him out of here he doesn’t belong here”

We nursed him back to health at the ranch with his illness and his behavior and we began to see the happy very young silly boy that he is. Laura began to look for the perfect family for him and we found Amie & Mark Miller in McKinney, TX. They lost their Boxer Gumbeaux about 18 months ago and were finally ready to open their hearts and home to another dog and Hubert is the lucky one. Amie will be home with him during the day and Mark also works from home. On the weekends he will enjoy getting to go to their Ranch and explore on long walks and the Millers are committed to helping Hubert continue with his socialization by providing him with opportunities for new experiences in different social settings.

Travis did his adoption and have stayed in touch with them to keep him apprised of any potential issues, all Travis hears are how much they love him:

❤️We are SO in love with him! He’s doing awesome. We have a few little things to work out like being scared of noises and panic barking. And have some separation issues we are working on. He is getting more comfortable and confident as the days go by. When we go on walks he’s timid so we keep those short and sweet until he gets more comfortable. He already knows where his home is b/c when we pass the house he pulls us towards it 😂 he is slowly learning to play with toys. And his little nubby tail never stops wagging. I think he knows his name but I also think he conveniently forgets it when he doesn’t want to listen… typical male🤷🏼‍♀️
we bought a ramp to help him get in and out of the truck so he doesn’t hurt himself. Ramp training was quite funny😂 he’s got it down pretty good now.
He’s been on several outings already and we will continue with those and keeping him active with other people so he knows not all humans are bad.
We can’t get enough of this sweet boy!

So off goes Hubert who will never find himself in a deadly situation again afraid and on the streets where he could have lost his life.

We wish them all the best and are so happy for their happy ever after story.

We were contacted last night about this big boy, he was found in an alley between a fence and a garage. He was terrified and fearful. He panicked on a leash with the shelter employee and thrashed and bit the leash in terror.

You have to understand the over crowded hectic position these employees are working under, they have to be safe and have no time to try and figure out who the dog is they just need to get jhim safely off the street. This big boy had some injury due to his behavior on a catch pole and flipping like an alligator and has broken blood vessells in his eyes that the shelter told us about. These are great people down there and always try and do the best they can with dogs coming to them.

He was immediately placed in a position of 24 hours before being put down due to this behavior, and went to work seeking a rescue that would take him, if they couldn’t find one he would be euthanized. Dallas Animal Services asked us if we would take him and we sent Travis down there this morning to assess who is and if we could help.

Shortly after Travis arrived he sent us a text saying I’m pulling this boy out of here he doesn’t belong here.

He said he has some leash trauma someone in his life has really hurt this dog in his life and he is so very scared. He said the shelter took him out to a yard with 10 other dogs and he was very afraid but he thought about playing with one of them for a minute. Travis took him into a yard by himself and had some conversation with him, he said other dogs bluffed at him through the fence and he just shook in fear and recoiled but after working with him for a little while he had him prancing on a leash next to him like a little show pony.

Hubert is finally well and has been mainstreamed with all of the other dogs. He was a little bit nervous meeting all of the dogs but the good news is when he gets a little frightened now he runs to us instead of away from us. A little love, and a hug and some encouragement and he was off mingling with the dogs again.

We have officially turned a corner and hopefully he never looks back.

Silly Huey who now happily runs about the yard wagging his tail and bringing me his goofy ears. We started this morning the process of having him meet strangers in the waiting room, he did just fine, a little frozen but that’s a okay for his first time. 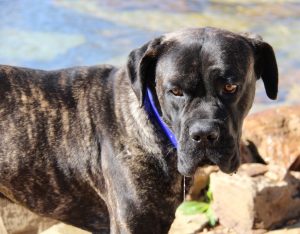 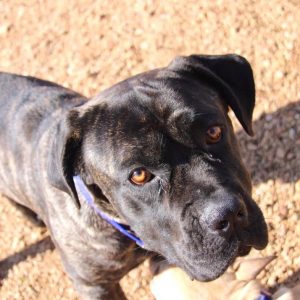 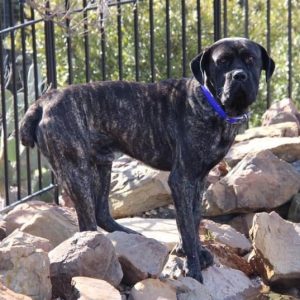 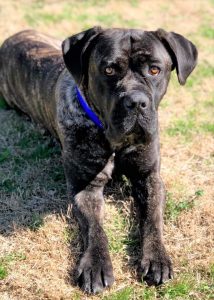