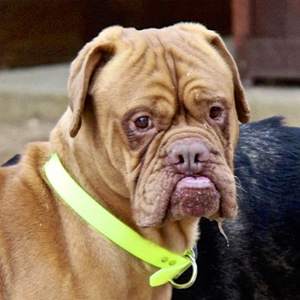 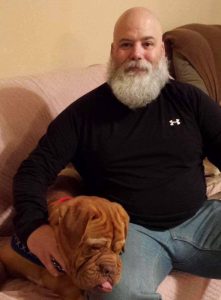 Jib Jab has left his foster home and moved on with his new life with Bob. Bob Frick is a U.S. Army Veteran who lives on a few acres in the beautiful country of Powhatan, VA. He works from home and when he travels he has someone come stay with his Boxers, Beau and Tia. His daughter Emily is staying with them while he makes the trip and she is super excited for their return! His pups love everyone and every dog and Jib Jab will have a new pack to call his very own.

Bob is unsure of his name yet but he promises he will announce it on the happy tails page for all of us to hear. Happy life Jibby Jabby 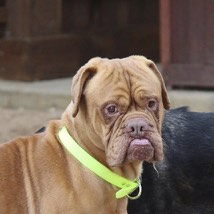 Jib Jab was sold by his previous owners on Craigslist for a couple hundred bucks to whoever would come and get him. He is a very sweet boy with lots of medical problems we are working through. His teeth were horrible, broken and painful and most had to be pulled. He has entropian and will undergo surgery to repair that. He has been neutered and will need to be treated for heart worm and will not be ready to go for a couple of months. He’s good with all dogs and is even good with a cat.

Jib Jab had many of his painfully broken teeth removed and had his neuter and entropian surgery and is feeling much better. He had demonstrated some issues with obsession with his bowl that needs to be worked on and some issues with being walked on a leash. Travis spent about 2 minutes with him and made him stop his gator rolling on the ground when attempting to walk him with a leash and he immediately recognized that Travis would not tolerate that and he leapt to his feet and walked the rest of the way to the car with no issue.
Jib Jab will need a strong leader who won’t tolerate nonsense that he tries and with that he will be a great addition. He gets along well with all dogs and cats.
Is very sweet but thinks he might try getting away with some things.
No can do Jibby Jabby, no can do.