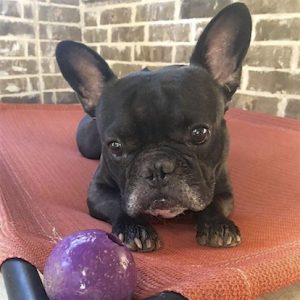 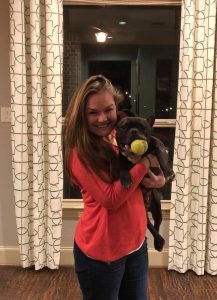 We were contacted by Amy Pyles from Midlothian with a very good application for Juke so we began the initial conversations about what this quirky guy is all about. We had foster mom, Linda orchestrate a meeting at her home so Amy could come and see his behavior and decide if she wanted to adopt this little man and work through his behavior. This took place last week and she was very much on board. We know that Juke’s behavior is all anxiety and we know that the more anxious he is the worse his behavior is. He needs a quiet home and Amy has that, Juke would be an only dog and we think that’s best too.

Juke went home with Amy last night and we intend to send Aaron Stewart into her home to help her get off on the right foot with this boy. She’s deciding between his name of Jasper and Walter but hasn’t decided.

Juke was surrendered to us by his owner. You know how I’ve decided to not discuss the reasons why they were surrendered… but in this case it needs to be talked about. What we were told was that he humps everything and they can’t get him to stop. He wasn’t neutered when he came and he also never humped anything after he arrived…. so we knew that wasn’t the real issue.

We had him at the Ranch for a couple of weeks with no issue at all for most of it. The last few days he was here before we sent him off to foster mom Linda’s house he started to growl at us when we told him to go in a den for his meals or bed. We don’t back down to this behavior and walked up on him and told him to go….. he did….

Once he went to Linda’s house it escalated, if she tried to put him in a crate he would growl pretty loudly and she questioned if he would bite her. She worked a different way with him and showed him a treat and tossed it in the crate and he would go in. He would also growl pretty significantly to get a leash on. She did it anyway and took him for lots of walks so that she was working the angle of making things that he growled at to be a positive experience. He loves, loves, loves to go for walks and he likes a treat too so over time he’s gotten better.

He went to Dr. Reno to get his neuter done and he growled pretty significantly at her for his exam and even while just sitting in his cage and people walked by. She texted me that he’s a problem and will need a specific home and I told her that I knew.

Linda had her in-laws come to stay with them and Juke loved them and they loved him too, I asked did he ever growl at them? and she said no but they didn’t make him do anything he didn’t want to do.
I asked Linda can he just live in a home where he doesn’t have to be crated? She said he will tear up dog toys and dog beds and he will scratch at the door.

It seems clear to all of us that he has a lot of anxiety and he demonstrates that anxiety by growling at you. I have no fear that he will bite, Linda doesn’t either. I asked Dr. Reno if he tried to bite anyone and she said no but he did jump towards people growling but only when he was in a cage.

Linda said he is very high energy, he requires lots of exercise to help clear his head and alleviate the anxiety that he has. He absolutely loves to play ball and he will fetch it and bring it back until your arm falls off.

I can only make assumptions about his previous home but I think its a safe assumption to make that Juke had taken control of the home and the owners were afraid of him. It’s unfortunate that people surrender a dog like this without being truthful about what the dog is doing because it doesn’t help anything. The reality is all of this behavior should have been corrected when he was just a young little pup, but when you don’t do that you end up with issues like this, and dogs lose their homes, and trying to change this behavior as an adult is much more difficult.

Juke needs a strong home, he needs an owner who won’t take his crap, because if you allow it he will begin to tell you what you can, and cannot do in HIS home…not the other way around.

Juke needs a home without children, he needs a home where the people are active and will give him the exercise he needs. Juke is a very friendly guy and most people wouldn’t know this issue existed until it came time for you to tell him to do something he doesn’t want to do like get in a crate.

Juke got along with all dogs at the Ranch, he has had a spat or two with Linda’s dog Miracle Marcus who is dominant as well. He has no issues with any of the other dogs in her home.

We have lots and lots of applications for Juke but that’s because they don’t know what I’m writing right now. This entire post will be placed on his bio on the website. We would prefer if he was adopted locally and the rescue will pay to send our trainer into your home. Aaron Stewart is very well versed in working with a dog like Juke and telling you how to set the tone and to keep the tone in your home with a dog like him.

We know the majority of people won’t want anything to do with him but somewhere out there is a home that has rules, that has exercise, and that will love him…. but will also keep him in check like he so very much needs to be..

The question is are you that home? or do you know someone who is?