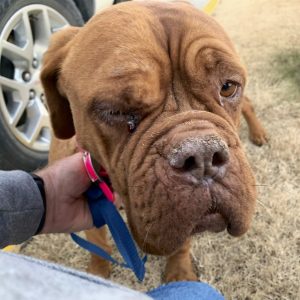 Ricky drove this sweet girl to us at the sanctuary where we waited for her to arrive. It was clear there was a problem with her heart as soon as we spent a few moments with her. She had labored breathing, but she was up on her feet and moving about and smelling things.

She was very thin, very small and very sweet. I looked at her gums to see if I could estimate her age, they were pink and she looked like she was about 6 or 7 years old. Travis put her in the tub and gave her a good scrub. When she came out of the tub the laboring of her breathing worsened and I could see her open and close her mouth like a fish and I took another look at her gums and they were gray. I texted Dr. Reno and told her what we saw and she said take her to the ER right away.

Ricky loaded her back in the truck and drove hers straight there. The ER doctor called us after an hour or so with the very bad news. Lana had a huge mass on her heart taking up 1/2 of her chest cavity. Dr. Yager said it was the largest heart tumor she had ever seen and no amount of money would save her and she was clearly suffering with no ability to help her.

We collectively made the decision to let her go..

Just a terrible outcome, thank goodness for tiny small favors, Trish telling them at the shelter to have a vet look at her and because of that she was let off her stray hold and was allowed to be released. In times like this you have to be grateful for the small things and the only good thing was that she got a nice car ride with Ricky, she had some dinner at the sanctuary, she got a nice warm bath with Travis and then her suffering came to an end.

Lana will be cremated and laid to rest in the memorial garden where she will always be remembered. We didn’t know her long but she mattered and we will make sure she anyone visiting the garden will know she is there.