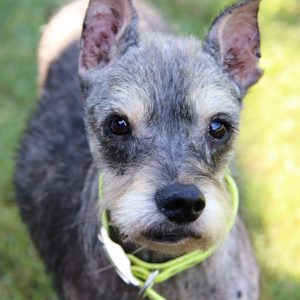 When we became aware of this tiny girl, we had one of our kind volunteers pick her up along with a Frenchie she had lived with.  It looks like about 6 months ago their owner died, and at that time his sister took them in. It’s obvious from her handwriting that she is elderly and must have not been able to care for them any longer. She didn’t know many specifics about the dogs including their age, but the vet assessed them as seniors.

This mini schnauzer has been neglected for some time. Her skin is a mess, and she was tested as heart worm positive at the shelter’s vet but we will be rechecking that. She also is very sweet and seems friendly with other dogs at the Rescue.

She is safe with us now and we will get her started on the path to better health.

We’re so happy to have Laverne here at Dog Ranch Rescue!

So Laverne is in pretty rough shape, estimated to be around 10 years old or more. We have discovered spot on her lungs which could be cancer.

Her chest x-rays have been sent off for the radiologists to read. One step at a time, like all the rest, decisions will be made one step at a time. It will be months before her skin is even healthy enough to be spayed leta lone have a full double mastectomy which would take months of time to recover from as well, and would all of that even be the right thing to do if she has cancer already in her lungs? We don’t know the answers, we only know the obstacles..

Right now she’s gone off to stay with and be loved by Julie.

Stay positive, Laverne, we will do our best…

Laverne has been with us for 6 months and came to us as a senior citizen in rough shape, huge hard breast masses that were cancer. We treated her like any other rescue and pursued surgery to remove them which included two full mastectomies of her breast chains. She was also heartworm positive which was the last thing left for us to get done before she would be finished.
Last week she broke out with ulceration sores in her groin along the side of where her masses were and we put her on antibiotics hoping it was just an infected sore. They didn’t clear and we have now discovered that the sores are in fact the cancer coming back and they are painful and spreading quickly with new ones today.

We would not allow her to suffer with this and have made the decision to let her go. We are so thankful that shes been living in Jenn’s house for months and months now giving her the chance to have the best life that we are sure shes ever had.

Jenn is beyond heartbroken and has asked if she could be the one to help her across the bridge which has now been done. We feel like we’ve been kicked in the gut with this news that was so unexpected. We knew that she was an old girl and wouldn’t have long but we were so hopeful that it wouldn’t be this soon.

She was a nut, a funny, silly complaining old goat and she will be sorely missed.

Rest in peace Laverne we all loved you.