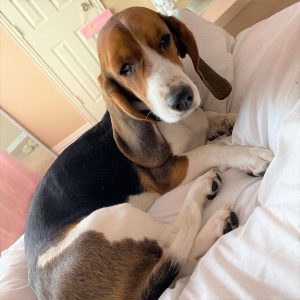 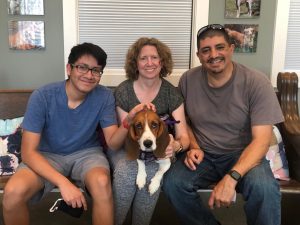 Robert Alvarez and Amanda Leverett arrived at the sanctuary with their 15 year son to whisk our sweet Lilly off to their home in El Paso, TX. Her new canine brothers Farley and Frodo are waiting at home for her and now that Lilly is feeling better she is all about playing and being silly. They will be a fun little trio! Lilly got a pretty harness and the cutest stuffed bunny to cuddle with on the journey back across Texas. They will be keeping her name and promise to update us all on the Happy Tails page. Be good sweet girl.

About Lilly:
This is a delicate story and shows just how small the world is and how things come together. We were contacted a few days ago about a little mixed breed pup that was brought into the ER after eating rat poison. The family when told how much it would cost to save his life with blood transfusions and hospitalization stated that they would take him home and shoot him instead. The ER doctor called and asked us if we would take him and we did. Fast forward to yesterday when we received and email from a girl that explained that she had a Bassett hound who was getting sicker and sicker after eating rat poison. She explained this was the second dog of theirs that had done so and they surrendered one of them to the hospital. A third dog left the house and has not been found. She explained that the family had been hit hard by covid and they had no ability to pay for medical expenses for any of the dogs. She explained that this Bassett hound was deteriorating, blood in her urine, a painful abdomen and seizures. She reached out to the ER again and that is when they told her to contact us as we had already taken the first dog. She then contacted us pleading that we take this Bassett Hound who is now in heat as they had intended to breed her. Ugh.
Sometimes rescue work is just so damn troublesome. Laura expressed to her that she needed to drive the dog to the ER and surrender her and we would take it from there. Laura also expressed that her gut told her that this family is suffering and she felt the “shoot the dog” was a knee jerk reaction to the cost of thousands of dollars to save the puppy. This girl was so very upset and clearly loved her dog. Laura said I’ve never talked to an owner surrender who made it so apparent that she wanted to do the right thing by her dog even if it broke her heart.

Situations are difficult and situations need to be dealt with, its not an ideal situation, it’s a painful one. This Bassett Hound was hospitalized last night in our care. Initially last night the report was that her clot times were off the charts high and they immediately started plasma. Thankfully she stabilized over night with the medical care that she very much needed. Her name is Lilly and she now stays with Dog Ranch Rescue.

We rushed Lilly over to the ER last night, you might remember she is recovering from eating rat poison. She had been doing well and then suddenly she became lethargic and down and out. Tests showed she has an elevated white blood cell count and very high neutraphills. Dr. Bronstadt called me after looking at her and asked could she be bred? I said well yes, she came from the same place that Murray came from he is 5 months old and intact. They lived together, she was in heat and both of them ate rat poison and had to have emergency care and were surrendered to us. We just didn’t know that she had been bred by the pup she lived with until now. Dr. Bronstadt said her uterus doesn’t look normal and he thinks that what he is seeing is early puppies and she absolutely needs to be spayed ASAP. These puppies would not be viable after rat poison and the medicine she had to have to save her life and the question is are they dead and causing her to be sick now.
We aren’t taking any chances, the mother dog always comes first and she will now move into the hands of Dr. Wilkins our surgeon, a dog that has been treated with vitamin K for rat poison is at a higher risk of bleeding in surgery so they will keep a close eye and administer blood products if she needs them. I will update you more when I know more..