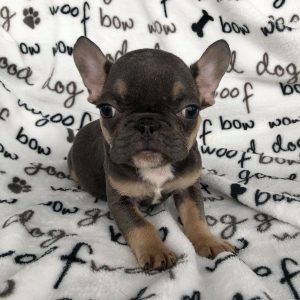 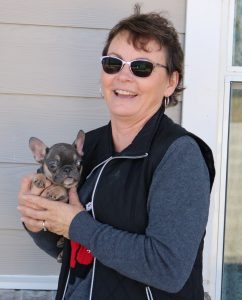 Little Mimi headed off to her forever home today. She was adopted by Judy and Dale Schneider from Whitesboro, TX. Judy and her friend Jennifer arrived at the sanctuary amongst lots of delighted cheering at the first site of Little Mimi. They were so excited that they left the house early and did some shopping along the way. Little Mimi is going to be one spoiled puppy! She has hit the jackpot with this family. Dale is a veterinarian and Judy is a licensed vet tech. Judy and Dale are planning to keep the name Mimi to honor the rescue and her namesake, a 92 year old mother who has survived COVID three times. Mimi will have 4 dog siblings to show her all around her new home. There are 3 frenchies who are age 3, 9, and 11. The 3 year old frenchie is special needs. There is also a 3 year old Border Collie mix who was a foster fail at the Schneider home. We know our fearless Mimi will fit right in. She will have 3 1/2 acres to explore which will make this little spitfire very happy. Judy has already joined the Happy Tails page so be on the look out for pictures of Mimi decked out in all things pink coming very soon.
Happy life Little Mimi!
About Little Mimi:

We were contacted about this baby several week ago asking if we would help her, we said yes but the person who was the “breeder” disappeared and we never heard from them again, until last night when we were contacted again and the pup was driven to Jenn late last night and dropped off. She has a little hydro head, Jenn said she is tiny and is the same size as the Corgi newborn pups right now and is supposed to be 12 weeks old.

We will get her in to be seen by Dr. Reno and see what they think about her, and we will be naming her after a 92 yr old mother……Penny Calvin (Little Mimi).
She is in a care facility and tested positive for Covid-19 three times. She, thank heavens, was asymptomatic and doing good now. We finally get to go see her in person in December….haven’t seen her since March.
Welcome to Dog Ranch Rescue Little Mimi

Little Mimi is tiny at just 3 pounds and 12 weeks old. She had her exam and obviously her little hydro head is a concern but we have had little hydro heads in the past so we are hoping for the best with her as she grows. She has luxating patellas and that is suspected to go along with her other physical abnormalities. What we do know is that she is a fearless little thing, sassy and adorable. She has a little bit of a skin infection so she is on antibiotics for that. Jenn said she is a hilarious little stinker that is jsut having a silly grand time playing with other dogs, all 3 pounds of her… 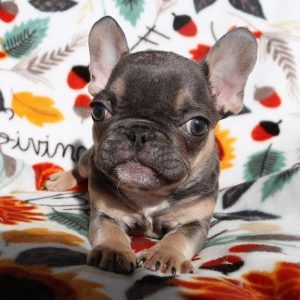