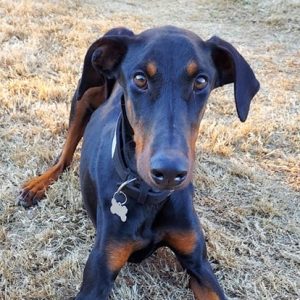 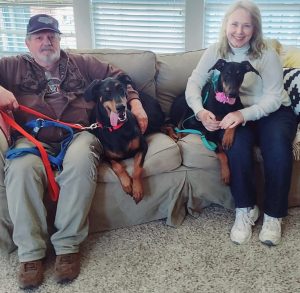 Far, very far away from living on a chain outside in the freezing cold and starving to death. That came to an end the day she was picked up by Ricky, from there she went to go and stay with fake mama Liz.
She flourished like a beautiful little flower and then Laura found her forever family.
Liz facilitated the adoption today of Louella.
“Daily Dose of Louella…
Lulu has left the building… Jim and Anna Corbett from Boone, NC drove 16 hours with their Dobie Shadow to meet their new little girl. It was Dobie wrestle mania in Fake Mama’s backyard for a good 30 minutes. She will keep her name Louella and they loaded in the car together and off they went. Have a happy life Lulu, Fake Mama will miss you!”
About Louella:
I saw that we were tagged on some page on Facebook, I took one look at her and commented to the person seeking help that we would take her. Her story goes like this, she had a mama that loved her and her mama died, she lived with a boyfriend who was supposed to take care of her but instead he left, and she was left behind. The family of her mama recently came to the property to move in and found her there starving. They sought out a shelter to send her to but they were all kill shelters and they didn’t want that, so they sought help on a Facebook page and that’s where I saw her.
Ricky drove out there yesterday to pick her up and Wes met Ricky at the Ranch last night to take her in, give her a nice warm bath, some dinner and a soft warm bed with lots of blankets and a sweater to go to bed. Wes said she’s a tiny little thing and she’s so very hungry, we will have to take it slow with her food and Dr. Reno will look at her tomorrow. Her plight is behind her now, and I couldn’t help but notice her beautiful hand carved leather collar, something I always admire as a collar lover, it tells me at one time she had a mama who loved her very much and then she lost her. Have no fear, that is a distant memory now and we know that she will once again have a mama who loves her very much but this time it will be forever.

Daily Dose of Louella… Louella-2 Sweater-0 Apparently leaving sweaters on Lulu on cold nights is not a great idea. She either A. Would rather sleep in her birthday suit or B. Is like Fake Mama and just prefers a v-neck. Either way we are going to have to get the pinking shears out and fix some things.

On a serious note Louella went to see Dr. Reno for her spay. Standard procedure on all Doberman Pinschers is to test clot time before doing surgery. Louella’s clot time was too long and we will not risk taking her to surgery without testing for Von Willebrands disease. Her spay was cancelled while we wait for results. If she tests positive, then we would move her spay to DVSC where they can mediate her ahead of time with helping her blood to clot properly after surgery.

Daily Dose of Louella… I think Louella has found her Valentine

Someone find this girl a Daddy! She literally loses her stuff if he leaves the room and she can’t find him. Fake Daddy has a bit of ADD/OCD (who doesn’t) so he doesn’t sit still. She is constantly following him around. Do you see why Lulu might be too much dog in Fake Mama’s house? But when he does relax, she is right there beside him and will literally launch the coffee table to get to him. Let’s be clear, Fake Mama has fed Louella since day 1. One would think that starving Louella would attach herself to Fake Mama. Nope!

Louella went to see the vet today and weighed in at a shopping 50 pounds. That’s a gain of 15 pounds in just a couple of weeks. Fake Mama is feeding her well, and she is a happy girl.

Louella came to the ranch yesterday to play with the dogs while her fake mama Liz helped us with intake and to get these dogs cleaned up and groomed pretty. Louella is gorgeous, and she has gained a substantial amount of weight already, her coat shines and glistens. She loves her 4 meals a day and some satin balls to boot. Liz reports to us that she does have prey drive and she stalks the cats. Liz has what we call dog cats so they don’t tolerate her nonsense but we will not be adopting this little girl out to a home with cats of even small fluffy dogs. Louella is a little triggered by squeaky toy sounds which leads you right back to her prey drive. She needs to live with a family with larger dogs and no cats.

Miss Lulu is definitely gaining weight. Fake Daddy attempted to weigh her by weighing himself and then holding her, sorry no picture. According to my scale she weighs 45lbs, at intake she was 35lbs., everyone’s scale is different so that is a guesstimate. She is showing more of her silly puppy personality every day; she gallops around and acts like a silly nut. Bodie did initiate some play this morning and she was pretty happy about that until he started chasing her and then she became a little weary. She still complains between 1st and 2nd dinner and bedtime. We have resorted to the water bottle method, there is no squinting, all I have to do is put it in my hand and she will reluctantly go lay in her bed next to Fake Daddy and huff. She is starting to eat a lot slower, so that makes me hopeful that she is aware that there will be a next meal.

Daily Dose of Louella…Brought to us by Fake Mama.
Lulu is feeling much better and is finding her naughty pants, the word “misunderstood” is starting to bite me in the rear. We are starting to have Geoffrey flash backs, my son has even called her Geoffrey a couple times. Her unbalanced behavior is throwing the energy off in my pack, so we went for a pack walk to restore help with that. The pack still won’t play with her (Insert Renee’s description of Chili) but they still all coexist just fine. She did fine on her walk, Fake Daddy and Fisher were in charge of her behavior and they both did just fine. She met the neighborhood ducks and watched Fake Brother wade in the pool; she almost took a dip herself. Fake Mama made some Satin Balls last night and she was very happy about that little snack. She looks bigger this morning, my suspicions on her being 8 month to a year may be accurate; Fake Daddy always says the foster dogs are anywhere from 2 to 6 years old. Ha ha because who really knows or cares for that matter.

She is still the sweetest little Doberwoman around.

Fake Mama Liz giving us an update on how Louella is doing:
Daily Dose of Louella, aka Lulu… She had two dinners last night and was very happy about that. Wasn’t a fan of bedtime, but she did settle down and slept the whole night. She isn’t a fan of outside, who can blame her, she potties and runs herself to the back door so she can be in the warm house. She found the couch, wasn’t sure what to do once she got up there, but she was pretty proud of herself. She also played with every toy that had a squeaker; she squeaks and squeaks and squeaks them. She tires easily, so there is lots of naps in between the squeaking. She has met my pack and they coexist; Fisher thinks she is a deer, so he is a little apprehensive, but the other two are tolerant of her in their house.

And maybe that is a shinny collar with crystals on it, who’s asking; her DRR collar was nowhere to be found when Fake Mama picked her up.

I got to meet Louella today, what a quiet sweet little tiny skinny, so skinny little girl. Travis has placed her up on that pedestal known as a gem. Wes is trying to keep her away from him because he is in love. thankfully Liz Ross our resident volunteer groomer texted me today and said does that little skinny Dobie need a fake mama? because Liz always calls herself fake mama to her fosters. I said this little gem might just step into your home and never leave, she said I’ll pick her up on Friday. So Louella will only stay at the ranch a few days but we will see lots of her, Liz sends lots of photos and updates and quite frankly this little girl could really use some spoiling time in a home…