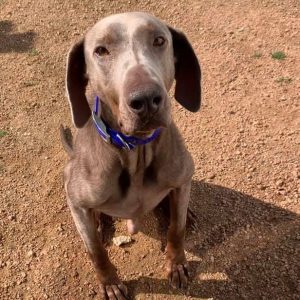 We knew it was a long shot but this sweet old man deserved a chance. Mac is miserable his cough is deep, and constant and today we got some better diagnostics to tell us what is wrong with this guy. First and foremost he has Heartworms that are so very bad, they have damaged his lungs forming granulomas that will never get better. He has cancer in various places in his body, one growth on his ear that would require removing his whole ear. Dr. Reno took some needle biopsies on a couple of other places and not only did she find spindle cells which are indicative of cancer she also found microflaria which heart worms in the needle biopsy. She has never, ever seen that before, his heart worms have consumed his body and are even in his skin.
The radiologist said his lungs are horrible, Heartworms and most likely a fungal infection, his heart is enlarged on one side and we aren’t even sure if it’s just due to heart worms or if his heart is in failure. The caveat was with final infections you cannot use steroids, and with heartworm infestation you have to use steroids so its a catch 22. We have no idea how old this boy is but he has been suffering for a very long time and because of that we would never be able to get him well. Quality of life is everything when weighing decisions and we can’t find a path to bring him quality so today he will be helped over the bridge.

I’m sorry your life has been so bad, we wish we could have saved you sooner, we will focus on your sister Cheese and always think of you when caring for her. 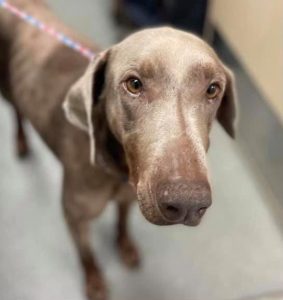 It’s been a very busy day, this morning this red Doberman male came up in our newsfeed, I was too busy to look at it but he stuck in my head. Much later in the afternoon I asked Laura if she heard if he got a tag, she had not heard. I went to the Dallas Animal Services page and saw him there, listed in three different places as 5 years old, 7 years old and 12 years old. You never know what is true as the shelter staff is making guesses at various points of contact. I read the initial report on him, emaciated, covered in fleas, heart worm positive etc, etc, etc… all the usual things that dogs that need a rescue have. Then I looked further and there was an updated report and some x-rays and it was around 3:00 pm with him being schedule to be euthanized at 4:00 pm.
We also learned then that he was brought in with a female Doberman too, I quickly gathered the information about him, and x-rays and sent it to Dr. Reno, she looked at it as this is what it said:
UPDATED MEDICAL NOTES 06/02/2021 :-Upon exam, wt. 61.6, BCS2.5/9, reported coughing by Foster until he gags. After being brought to Clinic from Injured, P is coughing, gums slightly pale. Sedate for x-rays and evaluation. P has color mutant alopecia with flaking of dorsal head and ear pinnas, AD dorsal base is denuded in a circular pattern, cranial enamel defects of upper PM4.
X-rays reveal several consolidated masses in lungs, some are linear in nature. These masses could by lymph nodes or other questionable tissue. In addition, the mid trachea has a dorsal elevation, cardiac size slightly enlarged. Lung tissue has a very interstitial pattern.
This is not a typical HWP pattern. Due to age of P, disease process is likely cancer, fungal or COPD and prognosis is guarded. Start Lasix and retake films on 6/3/21 for review.
Dr. Reno read it all and her advice was to let him be euthanized, looks like he has a slim chance of surviving all that he is sick with. Sometimes I just can’t go with the advice, and I just didn’t want to let go of him, does he have cancer, does he have a bad heart, is he terminal? most likely, but that doesn’t mean he has to die in the shelter.
We then looked at the female he came in with, very sick with upper respiratory symptoms, could it be distemper, could it be mycoplasma, or is it just URI? we don’t know, she’s emaciated and very shy and covered in fleas and of course she’s heart worm positive too.
We decided to tag them both and send Mr. Ricky Barnes to pick them up to bring them to the sanctuary where everyone will gown up and glove up and place them in isolation.
Ricky has arrived in time to secure them and he is on his way with them both where they will be scrubbed clean and all of their external parasites removed and they will enjoy a quiet peaceful clean and warm isolation room to themselves.
You know lots of times when you rescue dogs you know that you can save them and turn their lives around, sometimes you rescue a dog like this male and you know that you probably can’t but you do it anyway, this sis one of those times.. who knows maybe he will surprise us, maybe he will live for a year, maybe we will do the best we can and some family will adopt him in spite of it all and he will have the best 6 months he’s ever had. Who are we to not try and see what happens, my gut tells me let’s do this…so you know what…. we did….
Let me welcome to Dog Ranch Rescue,
Mac and Cheese
Let’s all send some positive vibes for Mac that we can give him some good quality of life for however long possible…