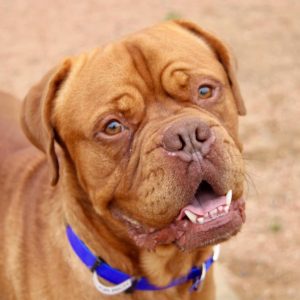 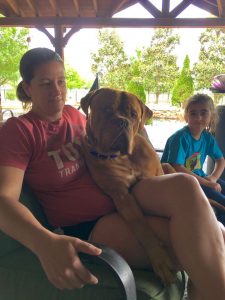 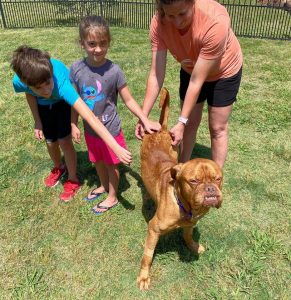 A couple of weeks ago they came to meet him with their family and as you can see it went pretty well but we still wanted to be sure. The next day Travis escorted Major Rich over to their house for introductions to the dog in the house, it was not seamless and Travis had concerns but they said they wanted to work on it with the instructions and corrections Travis recommended.

They have had him in their home now for a couple of weeks and have assured us that all is well and this quirky boy has his own family to call his own.

His name is now Bruce and as you can tell by the pics he loves his family and his mama and they all love him.

Well, in the middle of all these mill dogs coming in this big boy found himself in the shelter in Oklahoma City. He had been running as a stray for about a month with a whole neighborhood feeding him. He was caught by Claudia Hegener and then was in the shelter for his stray hold. Today his stray hold was up and Trish is on her way to the Ranch with him. We are told he didn’t do well in the shelter and he bluffs at them so they wanted him gone. He apparently has ticks all over him and in his ears and the shelter didn’t have anything to give him for it so we will be going to work on that too. Trish and Claudia said he is a very happy boy with lots of energy outside of a cage so we are sure his behavior was due to stress and confinement.

We are glad to welcome Major Rich Demarais to Dog Ranch Rescue. Major Demarais is in New York with the mobile hospital set up by the Army.

This boy Major Rich is going to be a work in progress, when he arrived he was in a crate in the back of Trish’s car and he is very, very scared, he growled at all of us and when approached he showed his teeth. It took us about 15 minutes to get him out of the crate. It was bad timing as Trish arrived with Bundt Cake, Amy Frances and Major Rich at the same as Ricky and Neal pulled in with the bus full of dogs. We had to just wait and take a pause because the first 15 minutes with Travis working on this boy is a critical time to establish a trusting relationship with a dog like him. We loaded all of the crates outside and thankfully the weather was cool and perfect because they needed to wait.

Travis took Major Rich over to the secondary yard and began working with him. The routine is gain trust, and then release him again and when you do that the fear comes back, and you have to reassure him again, please again, fear comes back and reassure again. What you are trying to accomplish with a dog like this is that we as humans are is safe spot, when something in the world scares you you need to run to a person instead of running away. Major Rich has been running as a stray for a couple of months and this is damaging to the mind of a dog who is living in fear in a sate of fright or flight.

We gave Travis the 15 minutes he needed and when I went to check on him Major Rich was on the ground sitting in Trav’s lap, all was well.

Travis took him and placed him in a den so we could do the cage release and begin working with all of these new dogs and after a couple of hours he went back to get Major Rich and once again you are starting all over again as he reverts back to the previous mind set of fight or flight and Travis began again. The period of time between gaining confidence in a dog like him gets shorter and shorter. Now it was time for Travis to sit on the ground with him and pull off the dozens and dozens ticks off his body and drop them all in a cup.

Travis said this was very scary for him and he would panic between very tick removal, he had scabs and sores all around his ears. Once the ticks were all removed it was bath time, spooky and scary business but once he realized there was massaging and rubbing involved he was all in and loved that part. After he came out of the tub and was all finished he came back to the tub and put his feet up on the ledge looking to get back in.

He will be fine, he will be just fine and what a handsome boy he is….

Major Rich is doing much better after falling ill a few days ago, he’s still in isolation but that’s giving him some much needed rest to fully recover. All of his behaviors with being cage shy and growling in a den have completely gone away and he no longer feels that he needs to react in such a way now that we all know we’re friends. He’s bonded to me rather quickly, so I’ve had Wes working with him the last few days and he reports that in a very short amount of time he’s bonded to him as well. All this means is that once you spend a short time with this handsome guy he wants to be yours forever.. and he’d never leave your side.❤️ 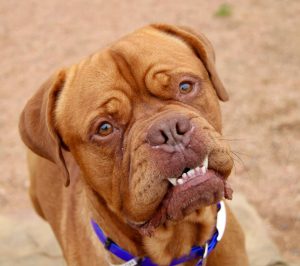 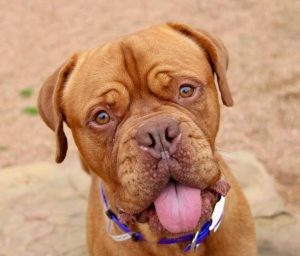 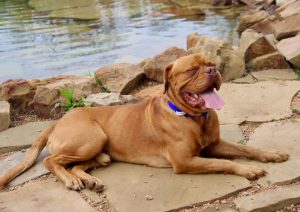