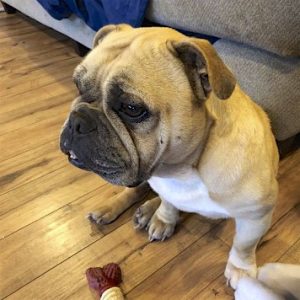 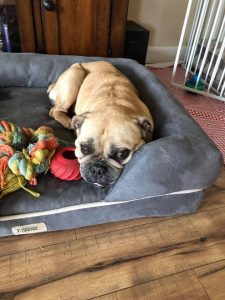 He was dumped in the parking lot of a vet office in Houston. He was emaciated and having lots of idiopathic head tenors but I’d turns out that was the least of his problems.
When foster mom Mary took him to be examined we discovered that he was in renal failure and there wasn’t much hope. Mary took him home to give him lots of love and see if she could get him feeling better for even a short while. He wouldn’t drink and when he did he would vomit. He has no appetite and even with encouragement he didn’t want anything. She gave him subcutaneous fluids to see if hydrating him would help but it didn’t.

We don’t let dogs suffer with no quality so Mary took this lovely sweet man to help him cross the bridge this afternoon so that he could move on to a better place.

We’re sorry we couldn’t do more but we’re happy he went with love and wasn’t lost out on the street anymore where some horrible person abandoned him.

Mel has been examined, he’s 10 pounds underweight and appears that his kidneys are showing that he has a chronic kidney issue. We are running tests to see if he has leptospirosis. They have started him on a kidney diet and sent Mary home with subcutaneous fluids to try and hydrate him and see if we can get him feeling better.

Mary’s vet looked at the video of him and confirmed that it’s obvious it’s idiopathic head tremors and not seizures. Mary has tried offering him a treat that he loves while he’s having one and did get him to stop, and that’s really all you can do for them.

It seems pretty clear that somebody has tossed him out on the street with tremors and sick with a kidney problem and didn’t want to be bothered with him. He’s not stable enough for any kind of surgery so teeth cleaning and neutering are the least of our concerns right now. We don’t know what the future holds for him but Mary said he’s just a wonderful guy who doesn’t feel very well but will still pick up a toy now and then and take a snooze on his back letting her know that he’s at least comfortable.

It’s just so hard sometimes to see what people do to dogs that did nothing to deserve this kind of treatment. Just so you know, he will be taken care of with everything that can be done and hopefully he will still have some quality left to his life.

We were contacted about this boy down in Houston yesterday from fellow rescue, Camo, asking if we could possibly take him. He was found wandering in a veterinarian’s parking lot, they picked him up checked for a microchip and began placing him on lost and found sites and contacted animal control letting them know that he was picked up and safe in case someone was looking for him. He’s about 40 pounds and looks like a mix of English bulldog and French Bulldog.

He began having what looks like idiopathic seizures and he had two of them in their care. We reached out to foster mom Mary who was nearby and she went and picked him up and took him home for safekeeping while we wait to see if an owner can be found. His teeth are just horrific, but other than that Mary said he seemed well cared for, he’s gentleman in the house and very good with her dogs and her cat.

You might remember we had these seizures with Piccolo Pete and consulted with Dr. Ducote our neurologist who said there is nothing to be done for them, they do not cause any damage, although they can be unsettling to watch, they really aren’t a big deal. She suggested trying to offer him a tasty bit of food or anything that might make him snap out of it or distract him with something.

Assuming that these are idiopathic at least we have that information on hand. We will take him to the vet as soon as possible and get him looked at and watch him closely.

Mary had already begun calling him Mel and I felt like that was a good fit so say hello to Mel!