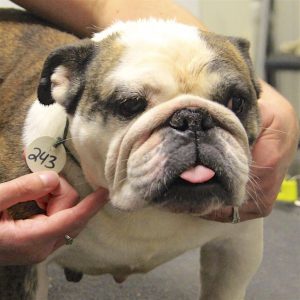 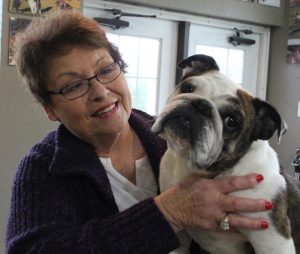 Oh my what a journey it has been with our little Milk dud, when she came to us she was pregnant with a soft palate so long she could barely catch a breath, a severely ulcerated eye from dry eye for years that had been neglected, covered in skin infection and just a lost little soul.

She has been nursed back to health for months now by foster mom Millie. She of course had one little pup named Hungry Happy Hippo but he just wasn’t ready for this world and passed away. Milk Dud was devastated and foster mom Millie helped her come around and try and be a happy little bulldog again. She had her spay and she then went in for palate surgery to help her breathe, her eye has been treated for weeks and weeks and today she was finally ready to be adopted.

I have known Jo-Ellyn for several years now in the world of rescue. she used to run the Alabama French Bulldog Rescue but has since retired from that. We worked together on many rescues including auction rescues.

She applied for Milk Dud immediately and has been waiting for her for 4 months to finally be ready to leave. Jo-Ellyn met this sweet girl today and adored all 30 pounds of her. Milk Dud will now be known as Jo Jo and her foster mom has been calling her that for quite sometime.

Jo Jo has 5 Frenchies that she will live with and that’s very good because she loves other dogs and bonds very quickly with them.

Off they went to their new home in Alabaster Alabama, she put on her new red harness and out the door she went.

She just turned seven a few days ago and although she just had a litter on May 23rd, they inseminated her just five months later for her to have pups again. She’s one of three Candy crew rescues that are potentially pregnant. She’s a tiny Bulldog, smaller than Ed and maybe weighs 30 pounds at most. She’s just precious and sweet. As soon as she is assessed by Dr. D we will have a better idea of if or when she may have babies.