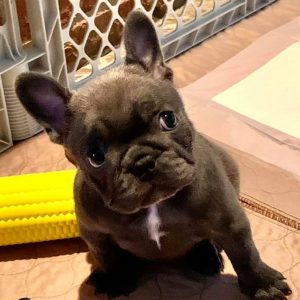 At the time Glazed was rescued we had no idea she was pregnant, she smuggled in one little singleton pup and was due in a couple of days. Going through the nightmare with Maternity Manor having distemper and already having Christi and Karla helping with two mamas that had already had pups that Jenn couldn’t help with we were in trouble, with no place to turn.
Insert Delzy who raised her hand and took on Glazed and her very soon to be born little pup Munchkin and she did a fantastic job filling in. Today Delzy had to say goodbye to this little pup and she has written her adoption to tell all of us how this story comes to it’s finish.
“Munchkin, the singleton pup, has thrived and is healthy. She is sweet and she is spicy. And today, she is off to her forever home!
Get ready for a little story. Grab a tissue and take a seat. You’re about to learn how this adoption was meant to be.
Long time DRR volunteer, Elizabeth Auld, lost her only brother in 1987 and lost her father in late 2019. Then sadly, on June 5th, 2021, her mother passed away. While Elizabeth navigated through arrangements, decisions, and her grief, she prayed for a sign for help to not feel so empty. What she didn’t know at the time, was that also on June 5th, DRR was at an auction to rescue some dogs and Glazed, the mama pup who smuggled Munchkin out of the mill life, was heading towards her life of freedom.
Understandably, Elizabeth had not been on Facebook for a while. When she did go to her feed, it was on June 9th, the same day as her mother’s service. Guess what the first picture she saw was? You got it! It was Munchkin, who had just been born the previous day. This was her sign! Elizabeth knew that this little puppy had to be hers and immediately put in her application.
She has patiently waited the 8 weeks for Munchkin to be weened and ready to go, and today is that day. What makes this day even more special is that it is the birthday of her brother who has passed away. The signs are clear, the stars have aligned, and Elizabeth and Munchkin are off to their happily ever after!
Munchkin will have a Siamese cat sister named Sophie, and will be the only dog in the home. She will be spoiled and treated like the princess she is. Elizabeth is retired so she and Munchkin will be inseparable!
Munchkin will be named after Elizabeth’s mother whose middle name was Ruth.

Village, we now introduce you to Ruthie Grace!
We will all look forward to seeing plenty of updates on the Happy Tails page!
Happy life sweet girl, you deserve it!”
About Munchkin:
Here she is, born at 12:45 weighing 11 ounces is this beautiful little blue girl who knocked our socks off with being unexpected. I thought about naming her surprise but we needed a donut name so we shall proudly call her Munchkin.
Mama is doing well, yes she was spayed after the c-section, she only has a little bit of milk and that’s always problematic for a mama with a singleton pup. Dr. Reno gave her a shot of oxytocin to try and help bring her milk in and Delzy is very well prepared for offering the baby a bottle as well. A huge thank you to Dr. Reno for running in the office on her day off to do a c-section to bring this baby girl into the world. 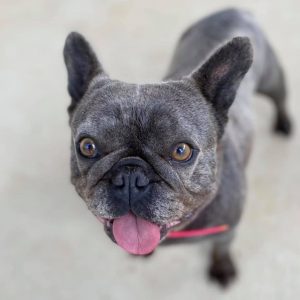