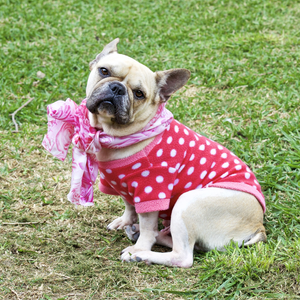 From day one her story compelled us to help her halfway across the country, lost in the woods in Florida. Thanks to the help of people who saw her out there, she was caught and driven all the way to Texas to start the process of getting her well again. Wonderful foster mom, Wendy, cared for her for months and months giving her love, continued care and medications, and she was finally the healthiest that she could be.

With that being said, Nell was adopted by Diana Eckhardt from St. Louis, MO who has been patiently waiting for her to get well for almost three months. We recently learned that Nell’s condition will need continued treatment for the forseeable future by a dermatologist to make certain that her ears stay infection free. When we received this new information we went back to Nell’s new mom and let her know we would understand if she might not want to adopt her knowing that she would need specialty care, but Diana immediately let us know in no uncertain terms that she wanted her baby to come home to Missouri!

We are thrilled for Nell, she won’t ever have to worry about being alone with painful ear and skin infections again. Thank you, Diana, for making the road trip down to get her and for giving Nell a loving home.

Her name shall remain Nellie and she will have a couple of dogs to live with and will want for nothing and the nightmare of living in the woods alone will forever be a distant memory. 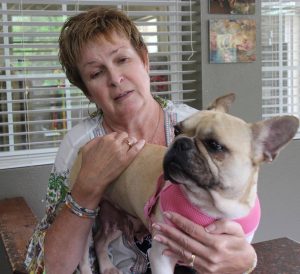 Nell was lost and abandoned for weeks out in a rural area of Florida. She was finally trapped and transported to us for the help she needed. She suffers from a head tilt and partial paralysis of her face on the left side. It’s believed that she has a very bad inner ear infection and is scheduled for and MRI and subsequent treatment by a dermatologist in the next week or two. Nell is a very shy, very scared girl who appears to have been a breeder mama for someone.

Nell is doing very well in her foster home. Nell had her two week post Myringotomy checkup with the dermatologist today. Her eardrums look great and they are all open again.

Her left ear is taking longer to heal because it was so badly infected it looks like that could take a month to improve.
So she will continue with topical ear and oral meds.
The greatest news is there is no infection currently present in either ear any longer and she has the all clear to have her spay.

This is an update from her foster mom Wendy on how she is doing in the home:

Nell is such a good girl & gives no trouble what so ever with her daily ear treatments & meds. She loves anything resembling food or a treat, so giving oral meds wrapped in pill pocket gets gobbled up immediately!
Nell loves people & she will approach anyone friendly that’s willing to give her a belly rub or really any affectionate attention. However, she does want to be the first in line for affection & has been walking over the other dogs here to get it. The other dogs in my home have been patient with her & given gentle correction to let Nell know that she’s not respecting their space. She’s doing better in this area, but we are still working on it.
Nell does this little begging jester with her leg & it’s just the cutest thing! I haven’t been able to get that on video yet, but did get a clip of her placing her foot on mine.
She’s also very talented in the bubble making department as well as having some epic drool!
Nell gets along great with dogs & enjoys hanging out with them. She hardly ever makes a peep as far as barking goes. I’ve heard her soft bark maybe twice in the past few weeks.
She rarely has accidents in her kennel when put up & I think those are due to being on Pred, causing her to drink a lot. Nell has access to a doggie door when I am home, she uses it & does not potty in the house.
She’s been a great dog to have around & I know I’ll miss her greatly when she gets adopted!


Looking to adopt a friend of your own? Visit our Available Dogs