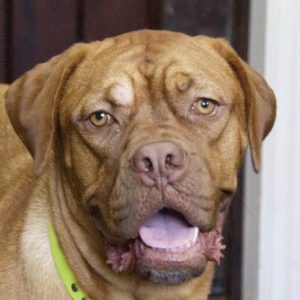 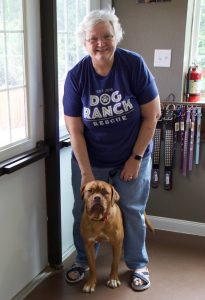 Let me tell you just how special Mary Jones is to all of us, she was first a follower of the page and reached out to adopt Mallory the Dogue De Bordeaux puppy rescued from a mill auction that happened to have a very bad heart. We thought we would never find someone to adopt her, Mary Jones reached out immediately and said I will take that sweet girl home.

She lives very close to Texas A&M and would have the best care at her fingertips for this baby girl. Very shortly after that she became a volunteer for us here at Dog Ranch Rescue, she wanted another DDB and she then adopted Cello/Penny.

She has made many transports for us from down south to help bring sick dogs in for us that we have rescued. In addition she fostered little Harp for us who also needed heart surgery and was plagued with so many other problems before she was healthy enough to be adopted. Mary cared for her for months and months and took her full circle to the dog that she is today.

When Pepper came in a young DDB with seizures we had an immediate adopter as I’ve told you before that vanished into thin air when it was time to finalize the adoption. Mary had reached out to us weeks before that and said if nobody steps up to adopt Pepper I am here and will gladly take this red bear home. We were sure that wouldn’t be necessary but we were wrong, apparently a seizure disorder does put a damper on adoptions because Pepper never received any other inquiries or applications.

We reached out to Mary and told her that Pepper would like to go home with her and she said I’ll be right there. Pepper is an absolute joy, the perfect temperament, calm and yet she would like to play with Mallory, perfect manners and just an over angel and we are blessed that Mary didn’t hesitate and she will be the recipient of a magnificent dog. Pepper’s phenobarbital levels are in the therapeutic range and she has never had a seizure while in our care but none of that mattered to Mary, what mattered was this girl needed a home and that’s just exactly what she is going to give her.

The two of them are wonderful and they both deserve each other.

Mary was quickly on her way to take her new girl home and to take Eclipse home to foster and rehabilitate this surgically repaired broken leg he has.

We thank you Mary, and we know that Pepper will be in the best hands possible.

We were contacted about this one-year-old Bordeaux yesterday. She was at a boarding facility in Dallas that has cared for her since she was just a pup and they love her.

She had a very serious seizure back in January and was hospitalized and put on medication. She had one more seizure since then but nothing for months now. Her “owner” travels to Brazil on business and told the girls at the Pooch Patio that he doesn’t want her and tried taking her to the ASPCA but they wouldn’t take her due to her having seizures.

This time when he dropped her for boarding he told them that he’s just taking her to the pound instead. He thought she was too much trouble and he didn’t want to bother with her anymore. They panicked and asked for help and we were glad to step in. The owner signed her over to us and never even said goodbye to her and walked away.

She’s spayed, up to date on vaccines, and gets along with all dogs. From now on we’ll make sure that she has a home that will never treat her this way again. 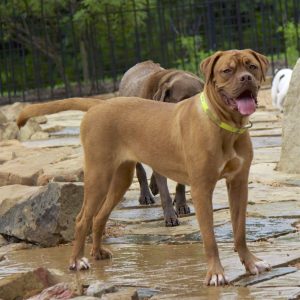