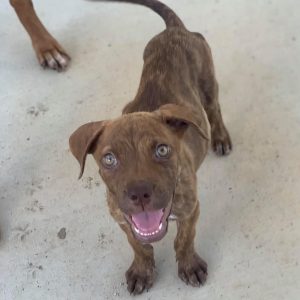 Age: Puppy
Sex: Male
Breed: Mixed Breed
About Richie:
We were contacted very late a couple of nights ago about this female Bordeaux down in a shelter in Laredo with two pups. They are all in very poor condition. We tagged them ASAP yesterday morning before they were heading off to be euthanized. Mr. Ricky Barnes is on his way down there to pick all three of them up and bring them back to us here.
I don’t have names, I don’t even know if the pups are males or females, but we will figure that out as soon as Ricky gets them off safely and sends me more information.

Terrible situation and they will be safe very soon…

They took Richie to surgery and they couldn’t find a vein that would work, they then loaded him in the car and drove him to their Dallas hospital to try with their critical specialist and all they could get was his jugular but she said she didn’t even think that would hold. His albumin bottomed out and they felt his possibility of survival was very very low and they felt that we need to let this boy go peacefully. Poor Millie is devastated, the whole team is upset and its just once again one of those kicks in the gut that no matter how hard you try you just can get them past it.
Rest In Peace little man, we tried so hard and so did your mama to keep you alive but we just couldn’t do it…
Mooie please take this pup home with you….
UPDATE 7/19/2021
Sadly once again Richie is not doing well. Millie said over the weekend he refused to eat, poor little guy is still wagging his tail but we knew there was a problem. Millie took him over to see Dr. Rolfe this morning and he called me with the bad news that Richie once again has an intussuscecption.
We knew that we could possibly face this, and we knew that we would have to make a decision to either euthanize him or a try a surgery called surgical plication. It’s not a highly successful surgery but it’s literally all we have to offer him. I told Dr. Rolfe lets go for it, let’s try too save his life and if it doesn’t work then we know we tried everything we could. This surgery will have them tacking his intestines in several places trying to keep it in place and to stop telescoping on to itself. He will have risks of it not working and the intestines still telescope, he will have risks of a blockage due to the in ability of the intestines to move the way they should and he will have risks of short bowel syndrome because he’s already had two surgeries removing intestine and her we are back again with this.
Millie is worried sick and can’t express enough what a joy this little man is who is having a very tough beginning to his life. We simply cannot attempt to once again save his life even if the odds aren’t that great.
UPDATE 7/13/2021

Unfortunately yesterday afternoon Millie contacted me worried about Richie. He is about 10 days out from having surgery for intussusseption and he had been doing great. He was playing like a pup eating and drinking and seemingly recovering. Yesterday she said he had a slightly distended abdomen, threw up his breakfast and she was worried. We sent her off to the ER with them and the concern was valid. The good news is that he does have platelets now before he had none sick with parasites, and ehrlichia and being emaciated its been a battle for this little man. The bad news is that he did have intussusception again. We sent him back to surgery again last night to repair the intestines. He is stable but obviously this is a big concern and if it continues to happen we will have to make a hard decision. He is transferring over to Animal diagnostic Clinic this morning so we will get some info from Dr. Rolfe or Dr. Bronstadt on how they see this and where do we go from here.

UPDATE 7/8/2021
Little Richie continues to recover at Millie’s place. A sick little man he is, with having had surgery to repair intestines from intussusception, to having an upper respiratory infection that has him coughing terribly, to having ehrlichia where he literally has no platelets in his blood at all. We have our entire team working on him to get him healthy again. It always astonishes me how such a sick little pup could ever survive in a warehouse in the heat, not to mention his sister and his mama too. Life is so very hard for so many dogs living on the streets, it truly is heartbreaking..

We always send a huge thank you to Millie for being our very valuable medical foster. She does such an outstanding job and Richie is in great hands.

UPDATE 7/4/2021
Richie has been busted out of the hospital and now gets to be spoiled with his new foster mama Millie!!

Richie is doing much better, has gone home with all of his medicine and hopefully he will begin to perk up and be able to act like a puppy again. He had a lot to say to Millie on his way home…

Yesterday Richie was taken to surgery, he had two areas in his intestines where he had intussuseption, Dr. Wilkins surgically repaired one of them and physically manipulated the other one to get it back into place. This has apparently occurred due to the mass quantity of various kinds of worms that all of them had, Joanie, Mama Marion and Richie. We have also discovered that both Joanie and Richie are ehrlichia positive that they got from their mom while in the womb. Life has been tough for all three of them but Richie has had the toughest time. Dr. Rolfe is very happy with how well he is doing post op but he will remain in the hospital for now.

We have been in crisis mode with Richie since yesterday. We ended up having to take him to the ER, we just didn’t like what we were seeing and he will not eat enough to make us feel satisfied. Yesterday they did an ultrasound on him and Dr. Rolfe discovered that he has intususseption and will need surgery. We have other issues with him that we don’t yet understand, his spleen doesn’t look right and neither do his lymph nodes. They have given him plasma already once and transfused him and are taking him to surgery now because we just don’t have a choice. He has also developed a cough and they cannot give us any promises that he will survive the surgery but we can’t not do it, he won’t survive without it either. They have blood and plasma on hand and are taking him into surgery now.

We couldn’t keep Richie out of the hospital. He’s just not eating well enough. His sister Joanie is doing better than he is, so we hospitalized him this morning with fluids and plasma. We will wait and see if they want to transfuse him and are getting chest rads as well.

Richie and Joanie were roaming the streets and then ultimately found taking up a safe spot in a warehouse with their Mama Marion. They have not been doing well, so sick with parasites and very low albumin and hematocrit. Dr. Reno had us give them canned recovery which is a very high calorie dog food for instances like this. Their appetite has been poor and she said if we cannot get them to eat they will need to be hospitalized and transfused. Happily, the captains offered them that food and they ate it all up and are doing better and better each day. They are very lucky to be alive and it’s wonderful to see them safe, clean and on the road to recovery.

UPDATE 6/19/2021
Mama Marion is precious and wants nothing more than some love and to share her big meat waffle with you to get your attention.

The story is Marion was found in a warehouse in Laredo with her two pups. She kept these babies alive by nursing them at the expense of her own body. All of them covered in ticks and fleas and the puppies bellies are just full of worms. They will need lots of various worming medications as we know there are many kinds in there. All of them will be first on the list to see Dr. Reno first thing tomorrow morning, in the meantime they are safe, clean and tucked into the isolation room at the sanctuary.

UPDATE 6/18/2021
Just a quick glimpse at this mama dog and her pups that are now safe in the hands of Mr. Ricky Barnes. Her pups are mixes, who knows what, looks like one might have some brindle and I’m sure they are some kind of Heinz 57. Ricky said one pup is a female and one pup is a male, looks like maybe around 4 months old but that’s a guess from here.
Welcome to Dog Ranch Rescue to all three of them.
Mama dog is Marion
Boy pup is Richie
Female pup is Joanie.

Happy Days for sure…. 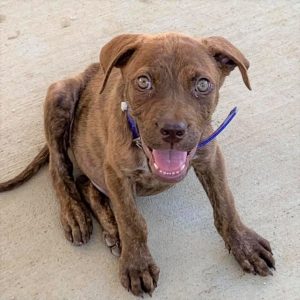 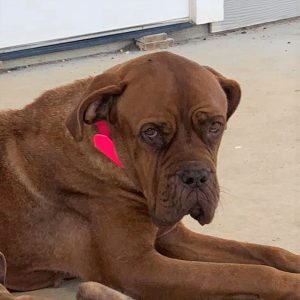