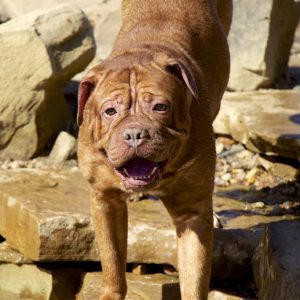 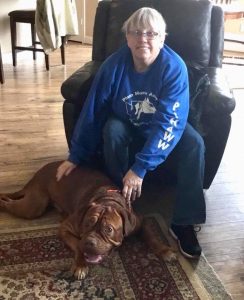 It’s been a long journey for Roscoe but today he has moved to his new life.
Linda Swick from Prineville Oregon loaded up her big red bear and hit the road with him.
He’s been through the ringer with dermatologists, palate surgery and neutering and we feel like his allergies will be better moving to the Pacific Northwest.

Mary was sad to let him go, he’s been one of her favorites but he hopped right in the car excited to start his new journey.
We thank his dad for trusting us with finding his forever home,and although we know he’s sad to say goodby he also knows that Roscoe needed much more than he could provide.

Sometimes we need to help someone with their dog when they can no longer give them what they need no matter how much they love them.
This boy here had a dad who loves him so very much but he had had such an extreme change in his life that he knew he had to do what’s best for his Dogue.
He’s 4 years old and he obviously has issues with his skin that need to be figured out. His owner told us he had tried dozens and dozens of foods and shampoos to no avail. He is very friendly with other dogs and was his dad’s best friend. It broke Laura’s heart to listen to his voice talking about his boy and how much he loves him, and how he felt like he was finding a new home for his child. He said he has to leave him alone for so many hours every day that he can see the light coming out of his eyes and he cannot be selfish any longer.

We will get to the bottom of his skin issue, whether it be diet, or allergies or something else, our team of vets will tackle it with everything we’ve got. Foster mom Mary went and picked him up down near Houston and let his dad cry and say goodbye.

Sometimes the word rescue is just too strong of a word…Instead I just want to say we are here to help him as opposed to rescue him…
I want to assure his dad that he will be able to see the light come back into his eyes, he will be able to see him find a new family who does have time for him, who will give him everything he needs every single day.

I can’t imagine how much this hurts but we will do everything we can to bring not only joy to his boy, but joy to his dad as well.
Thank you for trusting us with him.

Roscoe is starting to relax a bit and has even taken a dip in the pond. Baths will be happening frequently, we are in the process of transitioning him to a raw diet, he’s on antibiotics, and ketoconozole because he has bacteria and yeast on his skin. He has pretty severely infected ears that his previous owner worked hard on rectifying and we will continue to help him heal. He will most likely end up at the dermatologist but for now I want to get his infection and yeast cleared up so we can get him neutered. 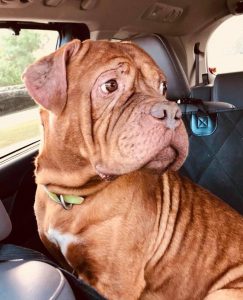 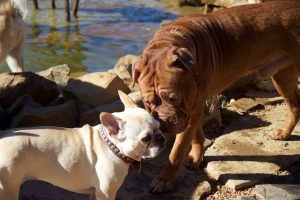