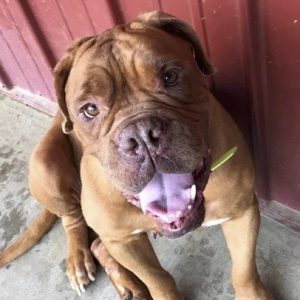 Sally has found her forever home with Lory and Andy Martin in Houston, Texas. Sally is the Bordeaux that continuously kept getting lost over and over again as a stray and was finally taken from her owner. Lory, was believe it or not, is one of the people who helped transport her in to the Ranch when she was first rescued.
Lory and Andy have waited quite some time for the right Bordeaux for them. You see they have ducks on their property and not just every dog can co-exist with them; Sally can and Sally does.

They love her like crazy and she is now in a forever place where she will never again roam the streets as a lost dog. 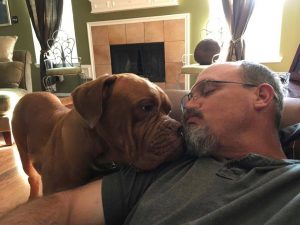 The story of this girl has been going on for quite some time now. Paige Dowdy Santell had contacted us about her a month or so ago with what has been happening, this is what she told us:

“About a year ago I was called about a DDB female under a house starving etc. She is friendly but scared of cars.

So here comes animal control they pick her up, she has a microchip and they contact an owner. He is an elderly man that is very frail and suspected of being a little senile, but he comes to pick her up. So a few months go by she is out again, once again she is picked up and reclaimed. This has occurred 7 times with her being found dehydrated hiding under a person house because she’s afraid of cars.
She is spayed but skinny and covered in fleas. She has been living on the streets for a while now. She’s a pretty dog probably 4 or 5 years old”.

She told us if the owner does not come this time they will let rescue have her. We told her if you can get her then we will take her, but once again he did come for her so the saga continued.
Last week Paige contacted us again and said she had been picked up again as a stray and was hoping he wouldn’t come for her because of the fines associated with her, and this time luckily he didn’t and she was secured today in rescue and we will be taking her in.

Her name was Allie but as you guys know when they have a life that’s not so good we will change their name, because I know what her name is we stick with a name that rhymes so with that I would like to welcome to Dog Ranch Rescue Sally.

I’m sorry it took so long but at least you’re now safe and will be fed and cared for. 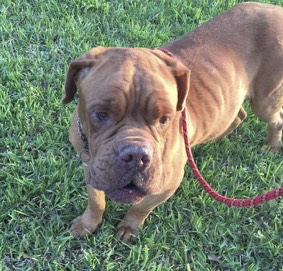