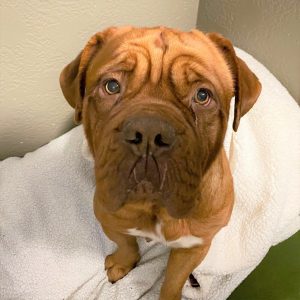 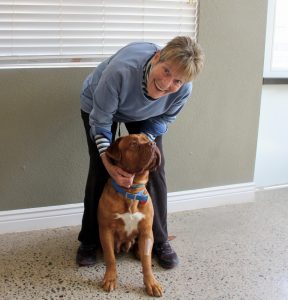 Sharlett has left her old life behind today, no longer living in a parking lot hiding out in a guard shack. She left today to live in Louisiana with Trish Ransom. You might remember Trish previously adopted our Betty Lou who, Betty passed away several months back and Trish was looking for a new bear and Sharlett was the lucky one. Travis said they were both so excited to meet one another, Sharlett full of kisses with Trish loved, she said Betty was not much of a kisser. Sharlett will be named Charlie and she happily hopped right into the car and got herself a new stuffed alligator.
We are so happy to see her head off to her new life, and wish them both all the best.

About Sharlett:
We were contacted yesterday about this female Bordeaux who is hanging around some kind of a paper factory as a stray. She’s got milk and appears to have had pups some time in the past. Rumors are swirling that she may have pups in a field nearby but all of that needs to be investigated. Lots and lots of cars go by in the parking lot with employees coming and going. She seems to hangout by an old guard shack which leads me to believe that she doesn’t have puppies as if she did she wouldn’t hang out away from them most likely. We are told she’s skittish and won’t let people get close to her.
A woman who works at this business is the one who had a friend who followed our page and told her to contact us. Travis spoke to her last night and she said she has seen the dog many times but can’t get close to her. We thought about driving out there last night but it was already well past dark and it would be an hour away from us. She said she would drive back over there in the dark and see if she spotted her. A little while later she texted Travis and said there is no sight of her.
This morning around 9:00 she called Travis and said she is back by the guard shack.  Travis and I headed that way. It’s about an hour away from us. We had raw meat, hot dogs, cheese and leashes in tow. We also brought Sweeps as our helper dog.
We pulled into this business, it was very large, a very big parking lot with lots of cars, loads and loads of big semi’s and loading docks. It is a very noisy busy place for a dog to hang out. All around this business are other industrial businesses with fields in between them.
We just proceeded to slowly drive all around looking for her and trying to understand the lay of the land, we drove by the run down abandoned guard shack, and back into the parking lot looking under trucks and cars. The lady that Travis had been in touch with called us and said she was going to drive over and meet us so she could show us all the places she is spotted. The first stop was the guard shack, we got out of the car and walked over to her, the door was slightly ajar, she peeked in and sure enough she was in there crouching under a broken old desk. The guard shack had an old window that I was able to see in while Travis inched into the door and closed it behind him to have a talk with her and ask her to come with us.
She’s pretty thin, she had lots of fleas, filthy dirty ears. She had pups, but that was a long time ago, she has no milk and there are no puppies anywhere out here. The pups she had are long grown up and she most likely got tossed out after that. I can’t even imagine her sleeping in that guard shack to try and stay warm in the storm for a week but that’s just what she did. She is shy, but sweet and she gave me two kisses on my nose in the bath tub.
She is all scrubbed clean and will see Dr. Reno on Thursday. After her bath and some time in the yard to enjoy the 76 degrees in the sun, we fixed her a nice bed in the lounge for her to sleep clean and peacefully. When I put those three blankets down, she leapt on that bed with a very happy smile on her face.
We are so grateful for people reaching out and we have named this lady bear after the lady who helped us find her and catch her.

UPDATE 3/4/2021
We are continuing to work with Sharlett on experience with other dogs. She literally has no skills on proper dog manners. What does that mean ? For her it means she has excited sexual energy towards both males and females but she tends to behave inappropriately toward dogs that we call low, what does low mean? It means they are submissive and don’t tend to defend themselves when they need to. The first encounter Sharlett had when a dog balked at her inappropriate smelling, over excited behavior she quickly grabbed the dog with her front legs and tried to pin it down. This isn’t an aggressive move it’s a I don’t have any skills move because I don’t know how to communicate with you, but it’s clearly inappropriate.
Travis continues to work with her and as you can see she is mostly behaving much better she is still too excited, and too interested but watch the Golden Retriever that tells her that she’s behaving incorrectly and rudely. The Golden bares her teeth and gives her a warning and what did Sharlett do? She turned away which is exactly what a dog should do when another dog tells them that they are rude. Sharlett had several other dogs that she also took their cues properly and when they corrected her, she listened and walked away.

Dogs are great communicators and they are a valuable tool in helping rehabilitate a dog with no skills. This is what it takes over and over again when working with a dog with no skills, but ultimately we will most likely seek an only dog home for her but it doesn’t stop our work in the meantime. We shall see…

UPDATE 2/28/2021
Sharlett is doing well, she loves to eat and is being fed 3 times a day. All of her poop the first couple of days was all trash and paper but that seems to have all passed through now. She is a little bit reactive with other dogs in specific situations, other times she has no attention given to them at all so right now we continue to keep her in a den where she can observe them, and watch them safely while she decompresses and rests. She loves, loves, loves blankets and has 3 of them in her den. She appears to be housebroken and she gives lots of kisses. We will give her more time before working on her with other dogs…
She has an ear infection, skin infection and parasites but thankfully is heartworm negative so it won’t take long to get weight back on her and finish her vetting. Over time we will get to know more and more about her.