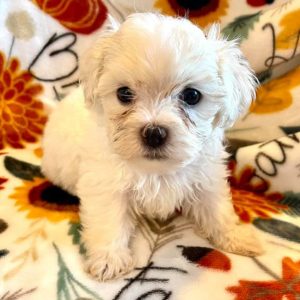 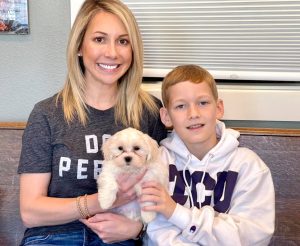 Stunt is going to live with Sydney Blowers in Fort Worth, TX. He is the largest in the litter and has absolutely no fear in his 3 pound body. He loves everyone and melted right into his new human brother Ryan’s arms as soon as they met. Stunt has a Golden Retriever brother named Dallas waiting for him at home. The family wanted to keep to a theme so Stunt will be named Knox after a street in Dallas. Ryan turned 10 years old a couple of days ago and had no idea until this morning that his birthday present was a cute new puppy! Surprise!
Enjoy your new family Stunt/Knox!
About Stunt:

This little white boy wearing a purple collar is half Pekingese and half Shih Tzu. He was born 9/15/21 and weighed in at 1 pound, 2.7 ounces.

Stunt (white puppy purple collar) is appropriately named. He is the first to do new things. His most recent stunt was to learn to escape the whelping pen. Then of course he had to teach the other pups his new trick. This boy is in constant state or dirty. 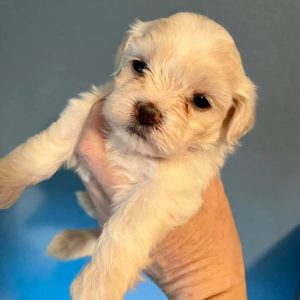 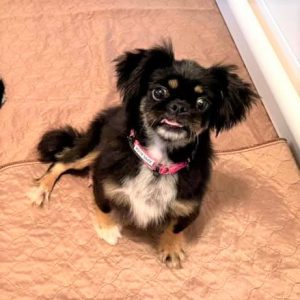