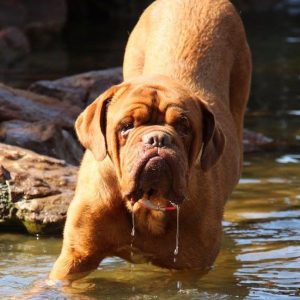 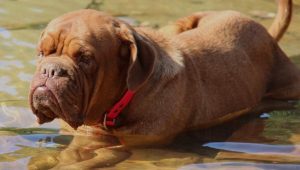 This girl is very special to us and about 6 weeks ago Teague was in the auction house too. Terrified and unable to move on a leash without snapping and rolling on the ground to get away.
She is absolutely a special needs dog and she needed a special needs adopter. People who understood that she would have limitations and would love her regardless. I told Laura my ideal home for her would be with Catherine and Randy Hooper, I knew they had interest in adopting another Bordeaux, I knew they had already adopted Mork and the special needs socially Jeff Goldblum. They are exactly the home that Teague would need and I knew that she could blossom with them, two very lovely people who know what it takes to work with a dog like her. Laura reached out to them and they said absolutely we would love to have her, the problem was they live and work in New Mexico they are both essential workers Catherine is a Physician Assistant to a cardiologist working in a hospital supporting Covid and Randy works at the state lab that performs Covid testing.
They could not leave the state to come and get her without having to quarantine and that just wasn’t a possibility for either of them…
Insert Mr. Ricky Barnes, we knew that Teague would have to be handled in a precise way to get her there safely and we knew that Ricky would be the one who could carry that off. Yesterday morning Teague was walked out by Jessica who she loves and loaded into a crate, the drive was about 10 hours, there would be no stopping except for gas, when they arrived Teague would be carried inside the house while still in her crate and safely put down with the door closed behind her.
She did pretty darn good, she met everyone, kept her distance but that’s to be expected at this point. Big Mork in all his glory will be her brother, Jeff Goldblum is living his best life, he is very nervous and likes his pen but Catherine and Randy said he will get in bed with them and snuggle, and that is all we can ask from him right now.
Teague is now in her forever home, she is far away from commercial breeding, she is forever in a place where she will be loved regardless of her limitations, she will never be abused again, ever….
We can’t thank the Hoopers enough for opening their home and hearts to this sweet girl, we cannot thank Mr. Ricky Barnes enough for always being there to be the Transporter for dogs in need.
We wish you all the happiest life ever…
About Teague:
Extremely afraid, she was a little hard to handle, dropped to the ground and was snapping at her leash and the auction handler. Knowing where she came from it’s no surprise, living as livestock, and with never knowing life as the pet she should have been, she panicked and has no idea what is happening to her. It’s disgusting and outrageous, in due time she will learn to trust and not be afraid.
She was born on 3/5/16 so she’s lived 4 years in this life. She has already been sold at auction before in March and here she is again on the auction block.
Formerly #79
We will be naming her Teague Henry….who is an RN at Baptist in Little Rock, Arkansas… fighting on the frontlines! She’s a phenomenal human. She has the sweetest Bull Terrier named Honey Bear. She has been looking Covid dead in the eye all while holding the hand of her significant other who is fighting his own battle against his kidneys. She never stops. She never quits! She just keeps trudging on! A hero. I know it would fill her soul to be a part of this.
Welcome to Dog Ranch Rescue Teague

Teague is the girl who wouldn’t walk on the leash and has the boogered eyes. She has made great strides in 24 hours, she moves about freely, she has come up for a few pets, she just worries when you try an lead her by a leash or her collar so for now we don’t we ask her to come with us and she is cooperating pretty darn good for a dog just out of the mill.
She thinks this pond is pretty interesting too.

Let’s talk about Teague a little bit. What we were told from the auction house was that she would alligator on the end of a leash and bite the leash and snapped at the man who worked at the auction house.
When we met her she wouldn’t come out of her cage and we had to go very slow with her and encourage her that it was okay to move. It was clear she had tons of fear of pulling at her neck, in a few minutes she made the decision to go ahead and move on a leash while we tried our hardest to keep from any tugging which was pretty hard because she would get scared and try and bolt.
She is now at the point where if we ask her to move about she does, but even if you want to try and lead her by her collar she quickly panics and you have to back off for a moment. I’m going to get a harness for her just to take the focus off of her neck which she obviously has had some very negative experiences with so we will try and get her past that. She does have entropian and will need eye surgery before she can be spayed and she has an appointment at the Eye Institute next week.
She is going to be fine, I spent some time in her den with her this morning giving her lots of rubbing on the underside of her neck which she very much likes. She does like this pond a lot even though she hasn’t made the decision to swim yet. Always remember all of the dogs that are rescued are completely different, they all need different things and this is why we focus on finding a good fit for the dogs we adopt out. So many people pick a dog that they love the way it looks and think that’s the dog I want and it just plain isn’t a good fit. We aren’t looking to match you with a dog based on how they look, we are trying to match the dog with a home and a family that works for all of them.
UPDATE 10/6/2020
Teague is a very shy scared girl, and she really doesn’t like it if you try and lead her by the collar or walk normally with a leash around her neck. She’s going off to the eye doctor today so we fitted her with a harness to make her more comfortable moving about with a leash connected to her.

Teague is an interesting rescue for us. You know people forget that dogs are individuals, their history is their own, their trauma belongs to them. What have they been through? most times we have to guess. What we do know is where she came from, we do know that she was sold at an auction in March at Hearland sales which is the “other” auction house I refuse to attend due to the owner/auctioneer who is let’s say “unpredictable” with his behavior.
Teague was sold in March to Mary Smith one of the constant mill owners that makes the horrible 100 list every year, great accomplishment in the I’m a pice of >?$#%## category but she always makes it.
Teague did not do well getting into the vehicle from the auction house after the sale, she literally is terrified of being led. She reacts pretty strongly, she will drop to the ground, flip, bite at the leash and gets herself pretty worked up. We can move her a little bit at a time in a controlled setting.
If you try to lead her gently by her collar she has a similar reaction. In addition she needs medication for an ear infection that she doesn’t want us to do, she needs eye drops that she doesn’t want us to do either.
Teague has entropian and needs surgery on her eye lids, she had an eye appointment on Tuesday to be seen and then scheduled for surgery. We tried using a harness on her to lead her to the car, it did not go well, it was simply too much for her and the appointment was cancelled. I told Dr. Reno her eye care will be put on the back burner for now. She needs lots of time to just be a dog, to have fun, to swim in the pond, to trust humans who have so horribly treated her, abused her and neglected her emotionally, and physically.
Teague is not afraid of people, she is very sweet, she will come to us for love, she loves the ranch, she loves rolling in the yard, and playing with other dogs, she will run and pull her ears back like a wild elephant, and it makes me so happy for her. I don’t know if she will ever get over her fear of being led, and of having medication put in her ears and her eyes but we will continue to work with her and if these are her forever issues, then we will find her a family who can love her regardless of the trauma that she can’t get past. 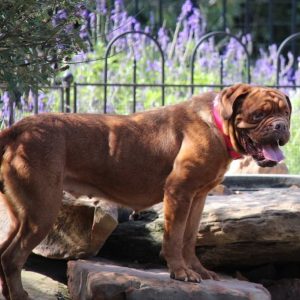