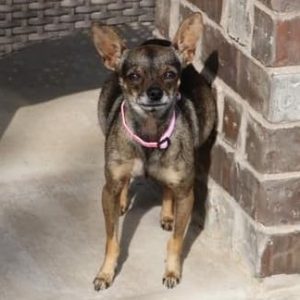 This little pregnant Chihuahua was living on the streets. She will go stay with Jenn as she looks pretty far along with her pregnancy.

I can’t begin to tell you just how much it hurts to write this post. If you only knew this little girl, she was loved by everyone who met her. It’s gut wrenching to save a precious little dog like her running the streets in the valley with a belly full of babies only to lose her this way with a devastating disease that we can’t even understand how she was infected.
Unity continued to worsen day by day. Millie called me this morning and said she didn’t feel good continuing, her quality of life was negligible and her neurologic behavior continued to disintegrate to the point where she didn’t want anyone to touch her without screaming and biting…so very, very far from the lovely girl that she was.
We all just feel like we have been kicked in the gut and are just horribly sad. We thank Jenn for taking care of her for 4 months only to lose her this way. We thank Millie for stepping up and taking on a distemper dog keeping her in isolation but in the end distemper won as it almost always does.
We continue to hold on to the hope that we won’t lose any others but we know that we have little to no control over that. 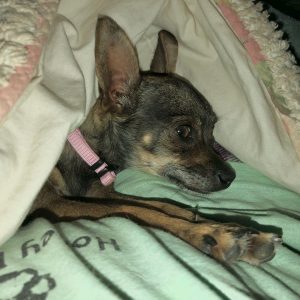 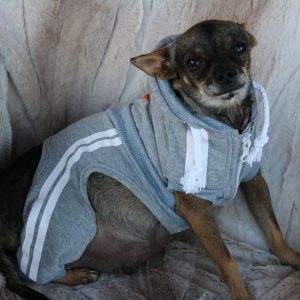 UPDATE 1/12/2021
So Unity has been examined, sadly she is heart worm positive.

We were shocked to learn with this enormous belly of hers that she is only about 43 to 45 days along. The pups are just now beginning to show their skeletons and right now we can see 4 or so but that is most likely not accurate. She has a couple of weeks to go where we will x-ray her again and get a better look but boy, oh boy this belly is going to get very very big….

Jenn giving us an update on little Unity who is very pregnant and now staying at maternity manor.

“Unity is a sweet girl. She gets overwhelmed with all the dogs coming to sniff her at once so I am introducing her to a few at a time. She warns them off with a super ferocious bark and they all listen. What’s that they say about chihuahuas wanting to be the pack leader?

. Poor girl is pretty miserable. Her eyes are watery and gunky and her front leg might be injured. She alternates between the tripod hop holding her leg in the air and gingerly limping on it. She is at the point where her belly is so big it makes her breathing noticeable. She has not had an accident in the house so far and she eats great. She kisses my face which is adorable. Of course her favorite thing is being held. She snuggles right into my sweatshirt or coat”